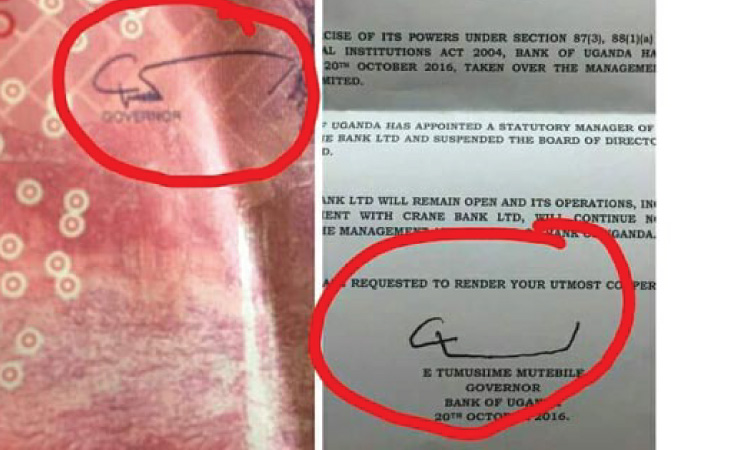 Following a press release signed by the Bank of Uganda (BoU) governor announcing that the central bank had placed the country’s third biggest bank, Crane Bank in receivership after running into deep financial trouble, Social media users questioned the authenticity of BOU letter that bore a different signature compared to the one on bank notes.

However the Central Bank on Thursday clarified that the variance in the governor’s signatures on bank notes and official documents was no cause for alarm because they were both authentic.
“Some people, have observed two different signatures by the governor [Emmanuel Tumusiime Mutebile]. Both are authentic; one for documents and the other specifically for banknotes”. The Central Bank said in a Twitter message.

Crane Bank, Mutebile, said, was “a significantly undercapitalised institution” and the Central Bank had taken a decision to appoint a statutory manager who would continue running the affairs of the mid-tier lender without interruptions.
“Crane Bank will remain open and its operations will continue normally, under the management and control of Bank of Uganda,” Mutebile said in a statement issued after the takeover.
In 2010 the Central Bank revised it minimum capital requirement to Shs25b, below which any bank cannot be allowed to continue operating.