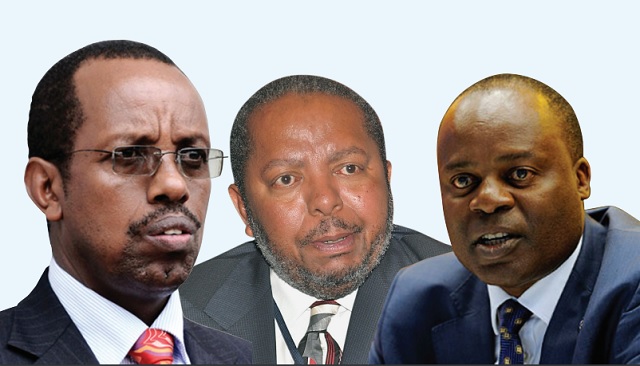 KAMPALA: The report of the out-going Committee on Commissions, Statutory Authorities and State Enterprises (COSASE) on Auditor General’s special audit report on the closure of seven commercial banks in Uganda, has urged that the Bank of Uganda (BoU) Governor Emmanuel Tumusiime-Mutebile and his deputy Dr Louis Kasekende be sacked from the Central Bank’s Board of Directors if the institution is to run its operations efficiently in the future.

The legislators on COSASE made the recommendation in their report following a recent probe of BoU on the closure of seven banks such as; Teefe Trust Bank, Greenland Bank, International Credit Bank, Cooperative Bank, National Bank of Commerce, Global Trust Bank Uganda and Crane Bank Limited. The banks were controversially closed between 1993 and October 2016.

“It is the recommendation of this committee (COSASE) therefore, that Article 161 (4) be reviewed to separate the offices the leadership of the Board and top management of BoU,” the report partly says.

It adds: “In line with G20/OECD Principles of Corporate Governance 2015 it is observed that in countries with Single Tier Board systems, objectivity of the board and its independence from management may be strengthened by the separation of the Chief Executive Officer and Chair.”

For instance, MPs in their report note that at the time of writing it, the BoU board had never asked for any report as regards the closure of the seven defunct banks and they tag this weakness to Tumusiime- Mutebile and Kasekende heading that board despite being top managers of BoU.

Under the arrangement above, the MPs said the board failed to supervise the banking sector, particularly the closure of the seven banks which was done by BoU officials without adhering to guidelines laid down in the Financial Institutions Act 2004.

The MPs say the separations of the two positions is a good practice which can help achieve an appropriate balance, increase accountability and improve the board and capacity of decision making and independent management.

Commenting on the report former minister Captain Francis Babu said Tumusiime-Mutebile and Kasekende should take responsibility for the mess at BoU, saying their juniors could have done things the wrong way without the two principals knowing their staff had acted out of the law. “A regulator cannot work without laws to govern them,” he said.

Babu said government has not done enough to strengthen BoU so as to regulate the banking sectors.

Meanwhile the committee has recommended that Secretary to the Treasury Keith Muhakanizi or his representative not below the rank of Commissioner be a non- voting member on the board. “This will be a good safeguard against any likely compromising of the Bank of Uganda independence guaranteed under Article 162 (2) of the constitution,” the report notes.

Further the report blamed government for creating a contradiction in the appointment of the governor of BoU and his deputy to the board. For instance, the MPs in the report noted that whereas Article 161(2) of the Constitution provides that the Board shall consist of the Governor, Deputy Governor and nor more than five other members, the BoU Act in section 7 provides that the Board of Directors shall consist of the Governor, Deputy Governor, Secretary to the Treasury and not less than four nor more than six other directors.

The MPs in the report advise that the above contradiction be addressed.

The report which was presented to MPs in parliament yesterday now awaits to be debated with the MPs expected to make further recommendations on how BoU are appointed but also how they will improve their performance in the regulation of the local banking sector.