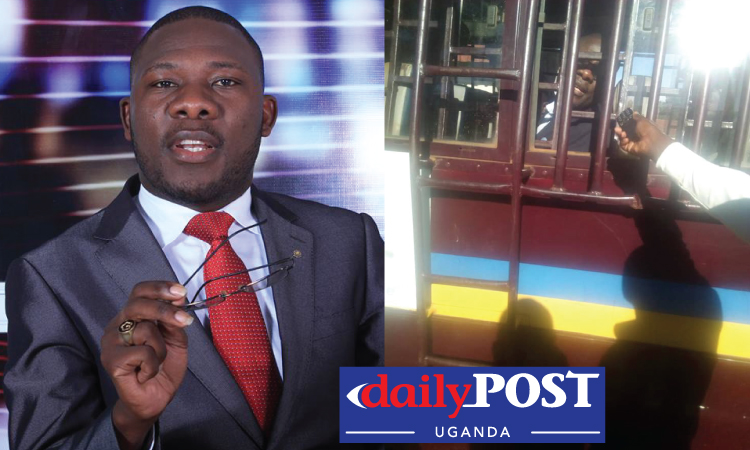 NBS’ Sir Simon Muyanga Lutaya has been sent to Kirinya prison for six months by Jinja grade one magistrate for failure to pay 294 million to his opponent whom he contested with for Bulamongi Constituency Member of Parliament seat.

Muyanga who is also a TV presenter and news anchor at NBS Television, filed an election petition contesting the the victory of NRM’s Kenneth Lubogo but lost the cases both at Jinja High Court on August 19, 2016 and the Court of Appeal  on November 22, 2017.

The court of appeal dismissed his petition with costs amounting to shillings 153m. Since then, Muyanga who is also the minister of information for Bulamogi Chiefdom started making payments in installments, through selling personal property to raise the money, reducing the burden to 51m which he was supposed to have cleared latest by December last year.

The Police were seen chasing away local residents who had gathered to attend the rally.
It was after then that the senior journalist sold off several of his assets including a car and land to pay part of the money.

In February this year, Jinja High Court deputy registrar, Jesse Byaruhanga issued arrest warrant after Muyanga allegedly failed to honour court summons which he (Byaruhanga) describes a contempt of court. This after Muyanga failed to show up in court to show cause why he should not have been arrested.

Lubogo’s lawyer, Hassan Kamba said then that Muyanga was supposed to tell court whether he was bankrupt after failure to pay the court fines. Muyanga did not show up and they have since been hatching a plan to have him face the law.

According to the warrant of arrest, Muyanga is supposed to be arrested, sent to Kirinya prison or Nalufenya and his property sold off to recover the money.
Muyanga’s lawyer Asuman Nyonyintono told this writer today that: But we are doing our best to have our client out of Kirinya.

“When are you are committed in such a case, you can be released immediately when you pay the costs,’ clarified Nyonyintono.