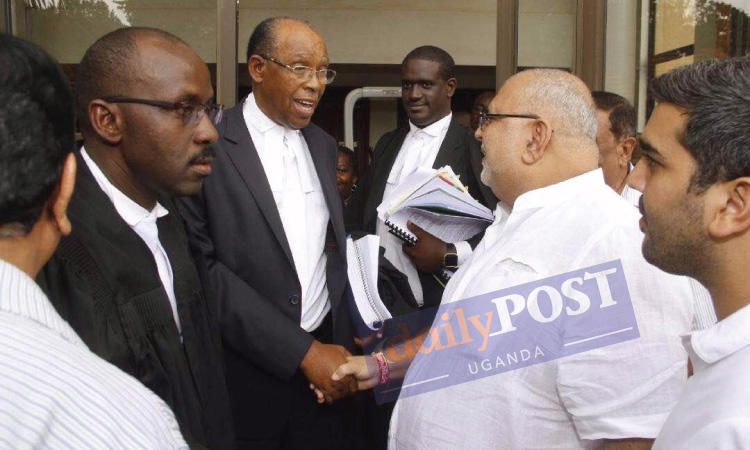 Representing Sudhir, lawyers of  Kampala Associated advocates say the law firms are heavily conflicted in this case and will require the lawyers Timothy Masembe and David Mpanga as potential witnesses in this case.

Commercial Court Judge Justice David Wangutusi has set 14 November 2017 to deliver a ruling on the application filed in court where tycoon Sudhir Ruparelia objects to former Crane Bank lawyers Timothy Masembe Kanyerezi  from MMAKS Advocates and David Mpanga from FK Mpanga and Company Advocates, representing Bank of Uganda in the main suit against him and Meera investments.

Under the main application, Sudhir Ruparelia cites conflict of interest of BoU lawyers of MMAkS Advocates and AF Mpanga Advocates.

Sudhir’s lawyers argue that according to regulation 9 of the Advocates and professional code of conduct regulations, any lawyer who has reason to believe that he might be required to appear as a witness in a matter before court, is barred from appearing in the same case as an advocate.

Dr Sudhir and Rajiv Ruparelia at the commercial court.

Kabatsi and his colleague Bruce Musinguzi say they have since fulfilled the requirements and have listed Timothy Masembe and David Mpanga in their written statements of defence as their would be witnesses and hence must excuse themselves in the case.

Among the pieces of evidence that Sudhir says the said lawyers will be required as witness in court is where they are privy to information regarding a 9.2 million Us dollars alleged extraction from Terminal Technology and another fraudulent transaction of 5.9 m dollars with Technology associates in Dubai.

Another piece of evidence is an implementation agreement signed between David Mpanga and Sudhir on 4th April 2017 which is also at the centre of Sudhir’s counter claim against Bank of Uganda.

Kabatsi and team say they will need David Mpanga to come to Court as witness and author of this agreement to resolve the issue at hand.

The lawyers also provided evidence where MMAKS advocates is said to have been instructed by Sudhir to issue a demand note and recover the mortgage property from Infinity investments yet in the Bank of Uganda case, MMAKS says no recovery was done by Sudhir from the said company.

More evidence in form of email chats authored by Mpanga was read out to Court for which he will be required as a witness.

The lawyers also argue that Sudhir will not get a fair trial or substantive justice since MMAKS and AF Mpanga advocates have been his long time lawyers and have become aware of facts which will prejudice his defence before court.

They add that regulation 7 of the Advocates act prohibits lawyers from disclosing their client’s legal information at a lawyer’s benefit.

In this case Sudhir has led evidence showing that Timothy Masembe Kanyerezi has been his personal lawyer and that of Meera Investments and has represented him in many cases.

Lawyers further argue that its prejudicial to Sudhir if Masembe appears at the bar and accuse him of fraud yet he has been his personal advocate for 12 years.

The concluding remark was that the two law firms should be permanently restrained from representing Bank of Uganda against Sudhir  as a message to the public that lawyers must hold their clients’ information regarding transactions, wills and marital affairs as confidential

However  in their defense  both Masembe and Mpanga claim that although they did  represent Crane Bank in several transactions, they never represented Sudhir in his individual capacity but  as crane bank’s  majority share holder.

The lawyers want court to maintain them as Crane Bank lawyers saying there is no evidence adduced  by Sudhir to show that they have in any way  breached  their  professional  code of conduct having not  even come across any information regarding the current case in which Bank of Uganda accuses Sudhir  of  fradulently siphoning over 100m Us dollars from his now  defunct Crane Bank.

KAA laywers consulting during their submission.

Meanwhile  Judge David Wangutusi advised both parties to settle their ongoing legal  battles outside of Court. The judge said that the mediation should be encouraged  to avoid  one of the parties to get really hurt if the case comes up for a full hearing.  His message was welcomed by other parties to this case like businessman Amos Nzeyi the founder of now defunct National Bank of Commerce who said he may get relief for his 5 year grievance ever since his  bank was fraudulently sold by Bank of Uganda.