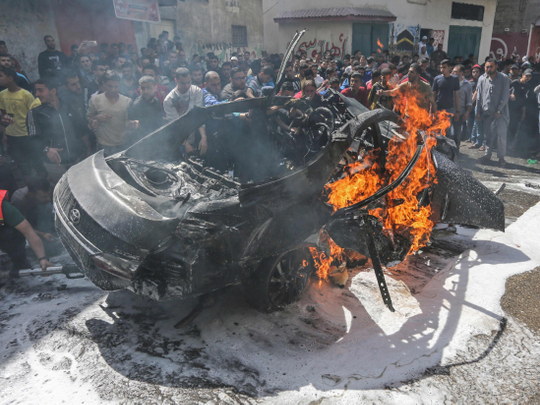 AGENCIES: Israel’s military carried out waves of retaliatory strikes in the Gaza Strip on Sunday killing 24 people after Palestinian rockets hit Israeli cities as a deadly escalation showed no signs of slowing, raising fears of war.

Gazan authorities reported nine Palestinians killed, including at least three militants, by Israeli strikes in the fighting that began Saturday with massive rocket fire from the strip.

Israel however disputed their account of the deaths of a pregnant woman and a baby, blaming errant Hamas fire.
Three people were killed in Gaza rocket strikes on southern Israel on Sunday. One was confirmed as Israeli, but police had not released the nationalities for the other two.

The Palestinian dead included a commander for Hamas’s armed wing who Israel said it targeted due to his role in transferring money from Iran to militant groups in the Gaza Strip.
On Sunday morning, Israeli Prime Minister Benjamin Netanyahu said he instructed the military “to continue its massive strikes on terror elements in the Gaza Strip.”

Smoke billows from a targeted neighbourhood in Gaza City

He said he had also ordered “tanks, artillery and infantry forces” to reinforce troops already deployed near Gaza.
The flare-up came as Hamas, the Islamist movement that rules the blockaded enclave, sought further concessions from Israel under a fragile months-old ceasefire.
Israel said its strikes were in response to Hamas and Islamic Jihad firing more than 450 rockets or mortars across the border since Saturday, with Israeli air defences intercepting more than 150.

‘Immediately de-escalate’
In addition to those killed and injured, the rockets repeatedly set off air raid alarms in southern Israel and sent residents running to shelters while also damaging houses.
The Israeli army said its tanks and planes hit some 260 militant targets in Gaza in response. It targeted mainly militant sites and in some cases militants themselves.

Israel said one of the buildings included Hamas military intelligence and security offices.
Turkey said its state news agency Anadolu had an office in the building, and strongly denounced the strike.

Israel said the other building housed Hamas and Islamic Jihad offices.
The Gaza health ministry said the dead from the Israeli strikes included a 14-month-old baby and a pregnant woman, 37. It first identified the woman as the baby’s mother, but the family clarified on Sunday that she was the aunt.
Israeli army spokesman Jonathan Conricus said that based on intelligence “we are now confident” that the deaths of the woman and baby were not due to an Israeli strike.
“Their unfortunate death was not a result of (Israeli) weaponry but a Hamas rocket that was fired and exploded not where it was supposed to,” he said.

Islamic Jihad’s armed wing distributed a video showing militants handling rockets and threatening key Israeli sites, including Ben-Gurion international airport near Tel Aviv.
On Sunday, Hamas and Islamic Jihad said their armed wings had targeted an Israeli army vehicle with a Kornet missile. It was unclear if it was hit.
Israel closed its crossings with Gaza for people and goods, as well the fishing zone off the enclave’s shore, until further notice.
Egyptian and UN officials held talks to calm the situation, as they have done repeatedly in the past, while the European Union called for an immediate halt to rocket fire from Gaza.

The UN envoy for the Israeli-Palestinian conflict, Nickolay Mladenov, called on “all parties to immediately de-escalate and return to the understandings of the past few months.”
The United States said it fully supported Israel’s “right to self-defence against these abhorrent attacks.”

Jordan, one of only two Arab countries with a peace treaty with Israel, urged it to “end its aggression against the Gaza Strip and respect international humanitarian law.”

The escalation follows Friday clashes along the Gaza border that were the most violent in weeks.
Four Palestinians, including two Hamas militants, were killed after two Israeli soldiers were wounded in a shooting during weekly protests on the frontier.
Israel and Gazan militants have fought three wars since 2008 and fears remain of a fourth.
A ceasefire between Israel and Hamas, brokered by Egypt and the United Nations, had led to relative calm around Israel’s April 9 general election.
But recent days saw a gradual uptick in violence, placing the ceasefire at risk.

A Hamas delegation led by its Gaza head Yahya Sinwar visited Cairo Thursday for talks with Egyptian officials.
The truce has seen Israel allow Qatar to provide millions of dollars in aid to Gaza, paying salaries and financing fuel purchases to ease severe electricity shortages.
Israel has several reasons to seek calm.
Netanyahu is engaged in tough negotiations to form a new government following April’s election and the country celebrates its Independence Day on Thursday.
Israel is also due to host the high-profile Eurovision song contest in Tel Aviv from May 14-18, expected to attract thousands of spectators.
On the Gazan side, the Muslim holy month of Ramadan begins in the week ahead.