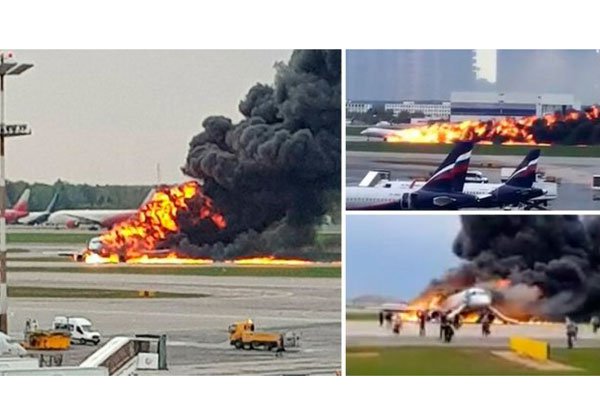 AGENCIES: At least 41 people were confirmed dead while 31 survived when a passenger plane made an emergency landing at Moscow’s busiest airport and caught fire, Russian state news agency TASS reported.
The Interfax agency reported that the plane, a Russian-made Superjet-100, had just taken off from Sheremetyevo airport on a domestic route when the crew issued a distress signal.

“It attempted an emergency landing but did not succeed the first time, and on the second time the landing gear hit (the ground), then the nose did, and it caught fire,” a source told Interfax.
The agencies did not immediately say how many people were on board. TASS said ambulances were sent to the scene of the landing and the passengers were evacuated.
Russian television showed a column of smoke towering over the plane. Other images showed the aircraft on fire as it attempted to land, then passengers leaving by a forward door.

According to the Ria Novosti news agency, the plane had been headed to the far northwest city of Murmansk in Russia. It said initial indications suggested an electrical fault might have caused the fire while the plane was in the air.