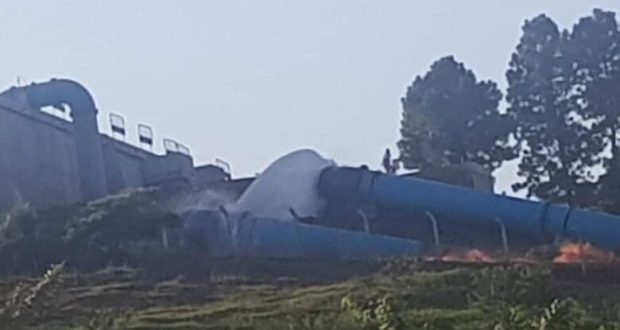 MUKONO: The National Water and Sewerage Corporation (NWSC) has promised to compensate residents who lost property yesterday after a pipe burst at a water reservoir on Misindye Hill in Mukono Municipality, spilling into homes.

Mr Samuel Apedel, the NWSC public relations manager, said they shall assess the affected homes with a view to compensating them for the damaged property.

“ A big pipe, which is 1.4 metres wide, burst and water flooded people’s homes but we immediately turned off the water and our team is now trying to reconnect the pipe,” Mr Apedel said yesterday.

He explained that it is the pipe that is fixed to the water tank that burst and not the tank as earlier claimed by some residents.

The area sub-county chairperson, Mr Amphrey Kyasa, said the situation was normalising as the NWSC team worked hard to repair the pipe.

“The water was too much but the National Water people rushed and helped other residents who were going to be affected,” he said.

By press time, the chairperson was yet to ascertain the number of affected residents.

Mr Robert Mayanja, a resident of Misindye, said after the pipe burst, water rose to more than a hundred meters high before spilling into several houses, cars and plantations.

He said several people, especially those living near the water tank, had all their homes drenched and had nowhere to spend the night.The affected tank stores water for the Katosi plant.

From the plant, water is pumped to the Nsumba reservoirs. The water is then extended to Kampala via Sonde and Namugongo areas.