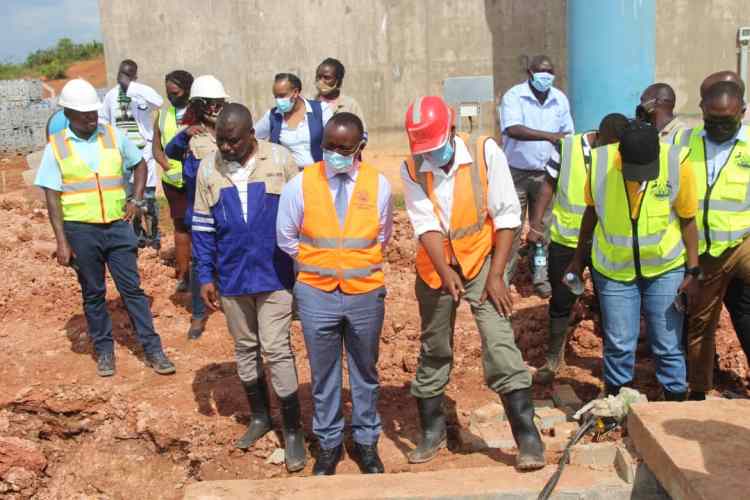 MUKONO: The Managing Director of National Water and Sewerage Corporation (NWSC), Dr. Eng Silver Mugisha has reassured customers that all is being done restore water supply to customers served by the Sonde reservoir.

Inspecting ongoing supply restoration works at the new reservoir, Dr. Eng Silver Mugisha explained that the inlet pipe to the reservoir was dislodged as a result of a pressure surge that forced one of the joints open.

Dr. Mugisha apologized to customers affected by the ongoing works and those inconvenienced by the spillage from the joint.

“We are working with the contractor to restore water supply in the shortest time possible and compensate those inconvenienced by the spillage from the pipe.” he said

According to Dr. Mugisha, the failure is not a result of shoddy work or poor workmanship. Defects occur during the Defects Liability Period and engineers fix them. The project is still under test and the incident has given NWSC engineers an opportunity to build capacity to handle emergencies on the new system as the contractor prepares to exit.

Giving assurance to residents, Eng Mugisha added that the line will be anchored among other measures being implemented to avoid any reoccurrence.
“We have installed water reservoirs on a number of hills for decades and safety of the installations and the surrounding areas is always our number one priority.” he said.

The new Sonde water reservoir, part of the Katosi water project will serve over 30 communities in the Kampala Water Metropolitan water service area.

The Director Engineering services Eng Alex Gisagara said the utility has built capacity over the years to manage such emergencies.

He revealed plans to connect the Sonde reservoir to a new 15million litres capacity water reservoir on top of Kanyanya Hill and subsequently add more water to the grid.

He shared that the reservoir at Sonde was built with strong concrete to last over 80 years.

“Since 1930 and the colonial times, NWSC has managed water water infrastructure. The wealth of expertise attained over time is sufficient to address any emerging system failures.” he said

NWSC is working around the clock to reconstruct, stabilise, and anchor the line to the reservoir inlet with an aim of restoring water supply this week.