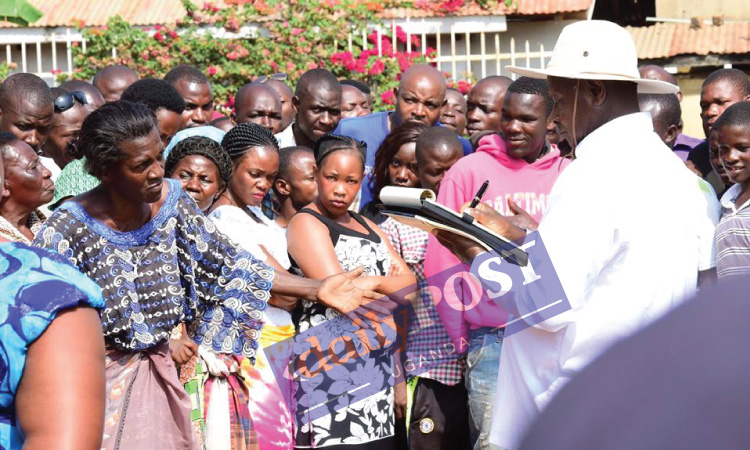 President Yoweri Museveni has made an impromptu visit to the death site of one of the victims in the spate of murders that have sent shock waves around the community and forced security forces on a frantic search for answers. Sarah Neliima, a 22- year-old resident of Kakindu – Kawuku was found dead in the bush near the home of a one Kiindu Lwanjo.
“We shall bring an end to these senseless murders. Murder is different from war. This is criminal. War involves guns and that’s what we have been busy fighting, leaving murder and other crimes to police. But police has been using backward methods. We are going to solve this including new technology such as DNA to investigate. We shall also install CCTV cameras in major cities to ease police work,” he said.
Neliima was an employee of Friends Restaurant and Takeaway near Mango Sports Bar in Katabi Town Council. Reports indicate 23 women have died in less than five months under mysterious circumstances in Wakiso District.
President Yoweri Museveni this morning visited Lyamutundwe, Katabi zone in Entebbe and took time off to interact with the residents. The President occasionally took notes as residents narrated to him the circumstances under which the bodies where found.
“I urge you to cooperate with the security agencies and to report any suspicious people,” he said.
The residents requested him to ensure that police be deploy patrol teams in their villages because that’s where the murders take place. They pledged to work with police and all security agencies to end crime.

The late Neliima whose body was found dumped near Entebbe-Kampala Highway on Wednesday last week.