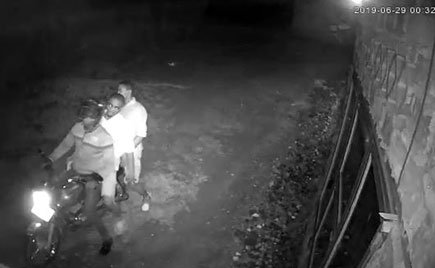 KAMPALA: One of the suspects in the horrific murder of a boda boda cyclist captured on CCTV footage that went viral on social media last month, has been arrested and confessed to the crime, police authorities have said.

“John Bosco Mugisha and his colleague murdered Derrick Mulindwa, a resident of Nabweru, Nansana Municipality on June 30, 2019,” Police said in a statement.
The two suspected robbers were on June 30 captured on a school CCTV camera strangling Derrick Mulindwa, a boda boda cyclist, in Kakyeka Mengo in Rubaga Division in Kampala.

Kampala Metropolitan police spokesperson, Mr Patrick Onyango on Wednesday, told journalists that one Mugisha alias Mukiga was arrested on Tuesday night at Nsiike I, Rubaga Division, Kampala after a tip off.

“Mugisha alleges that he escaped that day and went to Kabale,” Mr Onyango said.