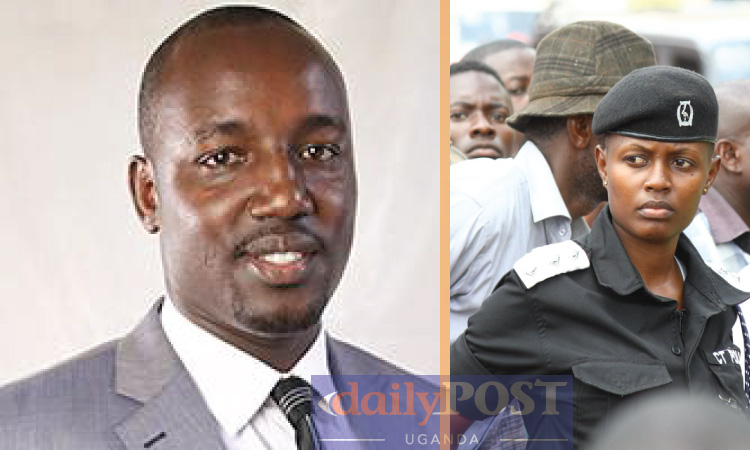 KAMPALA – Pamela Kentaro, a Counter Terrorism Police officer, was on Thursday shown in a picture standing next to Bobi Wine as the latter returned to Entebbe International Airport.

Ugandans quickly took to social media to claim Kentaro had been planted to spy on the controversial MP who is thought to be harbouring presidential ambitions.

But who is ASP Pamela Kentaro

The celebrity police officer was married to Bruce Balaba Kabaasa, the Chairperson Makerere University Appointments Board, it emerged on Friday.

According to info reaching our desk, Kentaro is daughter of the famous Mukiga lady known as Generous who used to operate a local foods restaurant in Wandegeya next to Sebankyaye restaurant before KCCA cleared the area for the market structures.

It’s believed that Balaba met her at the mothers restaurant while he was still Chairman Makerere University Convocation. Both Pamela and Bruce hail from Kabale District in Western Uganda.

The duo wedded about seven years ago in Kampala.

It’s understood the couple bitterly broke up six months after their wedding over what they described as “irreconcilable differences.”

Kentaro would thereafter join the police force. She is currently attached to Police’s Counter Terrorism docket.

Friends say Kentaro is a socialite, attending most of the music concerts in Kampala. She’s a single mother of two.

“She is a very jolly, social and amiable woman. She is dependable and cares for her relatives and friends,” said Timothy K, a friend of Kentaro.

“But she is tough and results-oriented while on duty.”

Kentaro has a bigger brother known as Robert and Innocent her younger sister. They were brought up by their mother single handedly.

Meanwhile Kentaro on Friday dismissed claims of spying on Bobi Wine, saying she has been friends with the musician-turned-politician for a long time.

“It’s quite absurd that a lot of negativity is being spread about me having been planted as a spy on Hon. Kyagulanyi,” said Kentaro.

“Bobi and I have been friends from way back and he knows that I am a police officer.” She added.