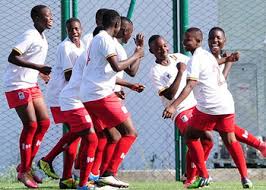 MAURITIUS: Uganda has won the inaugural COSAFA Women’s U17 Championship after beating South Africa 2-1. Goals from Fauzia Najjemba and Juliet Nalukenge were enough to grant Uganda the trophy in Mauritius.

Team head coach, Ayub Khalifa Kiyingi today made one change in the eleven players that started against the South Africans at St. Francois Xavier Stadium in Mauritius.

She replaces Katuuso Community SS player Catherine Nagadya who started in the Semifinal match against Botswana.

Before the match, the coach Khalifa said: ‘We are ready for the final. The motivation for our players is very high. They are all focused and we are going to put up a strong fight and we shall go back with the trophy.”