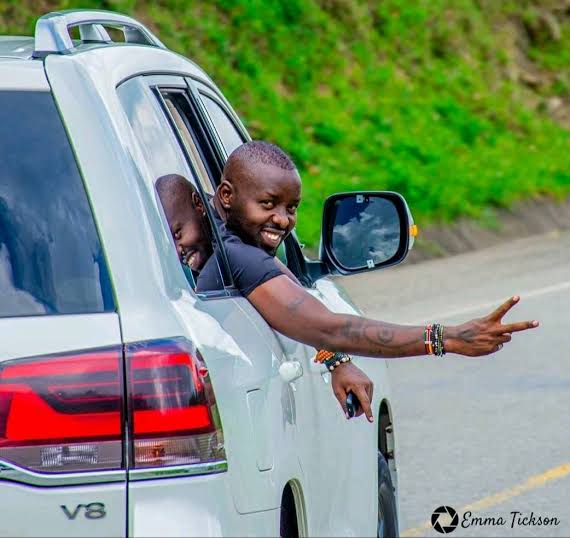 The accident happened around Maya, along the Kampala – Masaka highway.

Sources intimated to this website that the celebrated singer was heading to Kyotera, with two other colleagues at the time of the accident.

According to eyewitnesses, Eddy Kenzo and the two other occupants of the car survived with injuries.

By press time, the three had been rushed to a local clinic for first aid.

Eddy Kenzo, in a Facebook post, confirmed the accident, and attributed it to the road being slippery.

In the post, the artiste said that the car overturned and fell into a trench.

“We had a frightening car accident. The road was wet and slippery due to rain and when we reached Maya theirs was a bump in the road next to Stabex Petro station that caused my car to skid in a remarkable fashion. It did a 180-degree spin in the middle of the road, facing the wrong way!We then landed into a trench next to the Petro station.

This happened today morning and all the three people in the car survived.
We thank the good Lord for his protection,” the post reads.

Ugandan Musicians who died due to accidents before. Singer Denis Rackla was in 2017 involved in a motor accident and he was pronounced dead on arrival to Mulago Hospital. He got the accident while driving from his farm in Kayunga.

Dizzy Nuts Galiwango was in November 2017 knocked dead by a speeding Toyota Harrier in Kireka minutes after a night performance at Victoria Club.