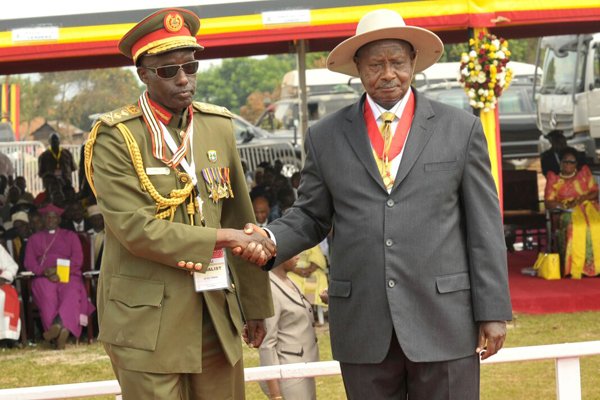 “He has been a dedicated and hard-working cadre,” Mr Museveni said of the army officer who played a major role in a guerilla struggle that started his presidency in 1986.

Mr Museveni confirmed that Gen Tumwine,68, succumbed to lung cancer at 5:46am from a hospital in Kenya’s capital, Nairobi.

“More will be said about him later. Condolences to his family, to the NRA-UPDF- NRM fraternity and to all Ugandans. May his soul rest in eternal peace,” Mr Museveni wrote on Twitter.

First Lady and Education Minister Janet Museveni wrote: “So with you: Now is your time of grief, but I will see you again and you will rejoice, and no one will take away your joy (John 16:22 ).”

Quoting the Bible, First son and UPDF land forces commander Lt Gen Muhoozi Kainerugaba said: “immortality means he is without a father, without a mother, without a genealogy, he has neither beginning of days nor end of life….he remains a priest forever (Hebrews 7:3)’. May Almighty God receive you into His everlasting arms Afande Tumwine.”

Under the same reference, Opposition National Unity Platform (NUP) party leader Robert Kyagulanyi aka Bobi Wine noted that “… For dust you are, and to dust you shall return (Genesis 3:19).”

Agriculture minister Frank Tumwebaze said: “I pray that the almighty God gives his wife and children comfort in this most trying time of grief.”