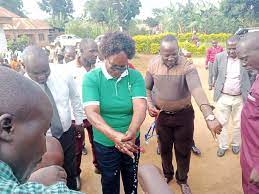 During the launch over the weekend Eng Emmanuel Mujuni, The manager of NWSC Masaka sub-region noted that they are advancing to cover all parts of Masaka city and so far 80 percent of the city is served with clean and safe piped water
Share
Tweet
Share
Email

MASAKA: Following the expansion of boundaries of Masaka city, the government has started expanding clean and fresh piped water to annexed areas of Masaka city in a bid to increase the volume of water to serve the increasing population.

The National Water and Sewerage Corporation (NWSC) launched a watering point (piped water) in Kabonera town Kimaanya-Kabonera division in Masaka city, one of the annexed areas to the Masaka city.

During the launch over the weekend Eng Emmanuel Mujuni, The manager of NWSC Masaka sub-region noted that they are advancing to cover all parts of Masaka city and so far 80 percent of the city is served with clean and safe piped water.

“The water extended to Kabonera is generated from Nabajjuzi swamp where NWSC has a water plant and from there its 20 kilometers to Kabonera which is the border of Kyotera and Masaka city,” He said

He noted that they have a target of one year to have the entire city covered including the annexed areas for the short term because in the long term they are embarking on the meager project of drawing water from lake Victoria to cover the entire region with clean and safe water.

“What remains is people to connect on our main pipe and have individual water taps for piped water but NWSC’s work is done and we are soon extending to Kkingo and Kaswa areas,” He said

He noted that for the case of the Nyendo-Mukungwe division they have already moved as far as Grammar and along Nyendo –Bukakkata road which is approximately 70 percent coverage of the division.

Dr. Abed Bwanika Mp Nyendo –Mukungwe applauded the new manager for his swiftness to ensure that the people of Masaka get clean and safe water.

“ I want to thank Eng Mujuni before people of Masaka for his swiftness to serve people unlike his  predecessor who spent most of their times in offices swinging than serving people,” He said

Dr Abed said that within nine months Eng Mujuni was in office the water coverage and extension are visible in all parts of Masaka city and adjacent districts.

The Leader of the Opposition Mathais Mpuuga noted that it is evident that NWSC is doing a commendable job in Masaka and revealed that he is already in touch with leaders in his constituency to also benefit from water extension as the case in Dr Bwanak’s constituency.

“ I have already asked the mayor Nyendo-Mukungwe to get in touch with local leaders and formally write to NWSC  seeking for more water services as it is being done in Kimaanya –kabonera,”He said

Mr. Mpuuga noted that 80 percent of non-communicable diseases that affect communities emanate from drinking unclean water asking locals to jealously protect the pipes and those with the capacity to have individual pipes.

Ms Harriet Nanyondo 67, applauded NWSC for extending piped water to their areas saying they will take a leave from using well water which has been the source of diseases like typhoid and Malaria fever.

“The project is funded by  a credit which Uganda government got from Friend Development Agency At a tune of 30million euros about shs  1.1billion  and the actual works are starting in October next year and the project  will take two years,” He said

The project will as well see the expansion of the network, developing and upgrading of sewerage systems in and around Masaka town, Improving   Fecal sludge in Nyendo, and Public toilets in markets, schools, hospitals, and taxi parks, and worship places to enhance sanitation and hygiene.

Currently, NWSC has 10000 customers in the Masaka area which covers parts of the Kalungu District. The NWSC customer base in Masaka is largely domestic at 56 percent, commercial at 23 percent, public standpipes at 20 percent while institutions like schools and churches stand at 13 percent.