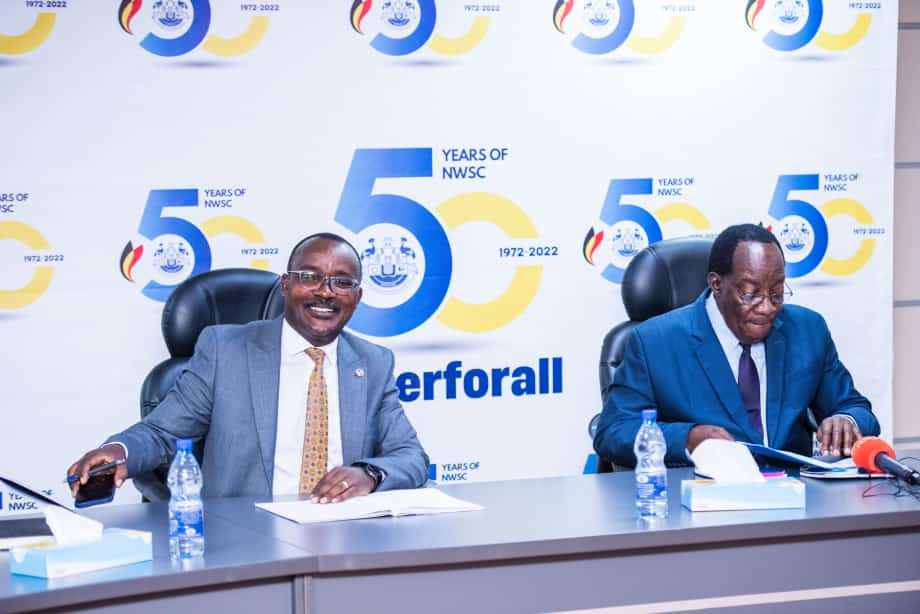 Col.Stephen Basaliza saluted government under Visionary leadership of H.E Museveni for supporting NWSC to fulfill it’s strategic mission of providing safe and clean water to all Citizenry and thanked Bushenyi District leadership for having welcomed Warugo Water project. Dr. Edith Kateete extended apology of Eng Badru Kiggundu- Chairperson of NWSC board for not making it due to other national responsibilities but was ably represented.

Eng Sam Kiggundu thanked H.E Museveni’s government for his continuous support to NWSC to make sure it’s Institutional performance is not logistically curtailed . Eng Sam Kiggundu submitted that NWSC will work concurrently with Contractors to make sure that distribution component network is done so that recipient areas get water in time as contractors hand over the project .

Chairman Jaffari Bassajabalaba thanked NWSC under auspices of Dr. Silver Mugisha for having given Bushenyi Warugo water Project and must be counted as “Christmas Bonanza” for Bushenyi District because as Chairman LC5- Bushenyi District; there was Public outcry for lack of enough access to clean and safe water by Bushenyi Communities and Warugo water Project will cause a milestone to mitigate water shortage in Bushenyi.

Bushenyi District RDC – Mr Atuhairwe Robert thanked NRM government for fulfilling ingredients of NRM party manifesto of providing water for all. He said Warugo water Project will provide water to formerly water stressed areas . Mr. Robert Atuhairwe promised to cause a solid supervision of Warugo water Project so that there is value for Public funds to avoid shoddy work .

Mr.Ken Niwamanya- a representative of contractors assured every one that they are doing what it takes to start the project; they have already put up the office in the area, arrangements to bring machinery on ground is in final touches, soil tests are being done and recruitment of labour force is soon starting that has certain percentage for local labour content. They expect to hand over the project in eighteen months.

Warugo water Project is expected to cost 11.8 billions Ug Shillings, pump 2.5 million litres each day and expected to serve 150.600 people in Kakanju, Ruhumuro, Kyamuhunga and Bitooma subcounties and the surplus water will be piped to Bushenyi- Ishaka municipality.