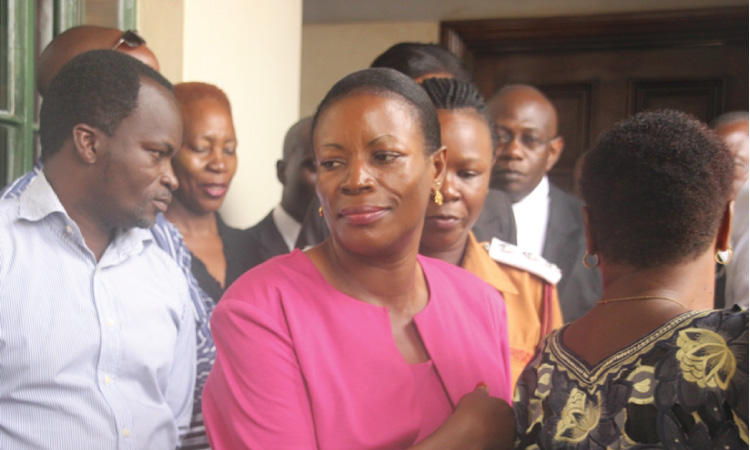 Court has acquitted Sarah Nabikolo the widow of slain businessman Eriya Bugembe Ssebunya alias Kasiwukira of his murder while her co accused have been convicted.

High Court Judge Wilson Musene’s verdict comes 10 days after assessors, John Musana and Joseph Wasibi in their joint opinion advised court to convict Nabikolo, 51, her cousin Sandra Nakungu, 36, and Police officer Ashraf Jaden, 40.
Ms Sarah Nabikolo was on Wednesday acquitted on grounds that she wasn’t involved in the murder of her husband, Kasiwukira.
However, her cousin, Ms Sandra Nakungu and Mr Ashraf Jaden, a police officer at Muyenga Community Police Station were convicted of the said murder.

The presiding judge said the two had a common intention to kill Kasiwukira.
Ashraf knocked Kasiwukira and therefore was guilty of murder according to the judge.
Kasiwukira was killed on the morning of October 17, 2014 as he was jogging in the neighbourhood of Muyenga, a Kampala suburb. He was hit by a car, which sped off after the incident.

The police referred to it as an “intentional run over”. About two months later, the three main convicts, Ms Nabikolo, Ms Nakungu and Mr Jaden were charged with murder.
The court case gripped the city, especially when witnesses spoke of alleged marital problems between Kasiwukira and his wife. There were also testimonies about witchcraft in the home.
Although Ms Nabikolo admitted to having marital problems with her husband, she said she had tried to resolve them and would never consider murdering him.

Kasiwukira is remembered for his critical role in the development of the local music industry. He was the first person to duplicate songs of different artistes onto cassette tapes in the early 1980s, which tapes he would brand with his logo “Kasiwukira” and then have hawkers sell them around the city.
At the time of his death, he was the deputy treasurer of the Kwagalana group (a group that is known as the rich men’s club in Kampala).