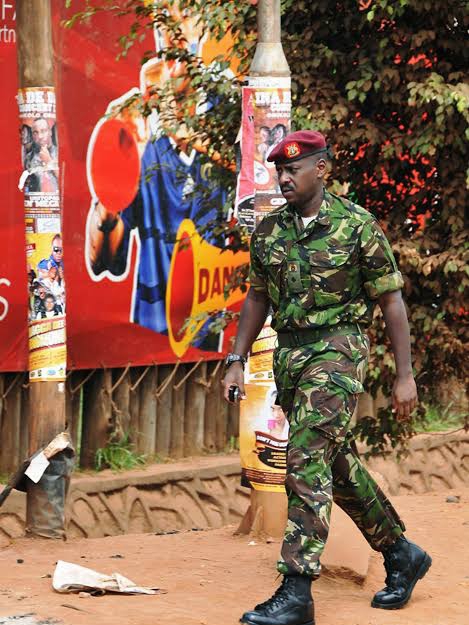 KAMPALA: The Senior Presidential Advisor on Special Operations Lt Gen Muhoozi Kainerugaba has called for a speedy investigation to establish the cause of the fire at Uganda’s oldest University.

Authorities including the University and the police have not yet established hat exactly caused the fire, but they said the fire brigade has contained the fire that started moments after midnight.

One of the earlier messages on the University social media handles reads: “The Police Fire Brigade is trying to put out the fire which has now covered almost half of the roof. It’s a trying moment for us.”

“Everyone is trying their best. The fire is heavy and sprouting from the right side of the Building. The fire flames are heavy coming through the right side of the roof which has sunk in. We all need to pray for the Ivory Tower.”
However in his statement Muhoozi said, “This is a tragedy and it’s unacceptable. I hope the relevant authorities quickly establish whether this was an accident or foul play. I am confident we can rebuild our building soon,” Gen Kainerugaba said in a tweet Sunday morning.

Meanwhile, President Museveni who is scheduled to speak to the nation this evening regarding the COVID-19 pandemic is set to visit the University.

Prof Barnabas Nawangwe, the institution’s Vice-Chancellor says records that have been destroyed by the fire are backed up and available in digital form.

The VC noted that the entire right side of the building and documents in the section were all destroyed completely.

“It is a very dark morning for Makerere University. Our iconic Main Administration Building caught fire and the destruction is unbelievable. But we are determined to restore the building to its historic state in the shortest time possible,” Prof Nawangwe said in a tweet.

Established in 1922 as a technical school offering courses in carpentry, building and mechanics, Makerere University in Uganda is the oldest higher education institution in the country.

Its main building that houses most top offices has been one of its main defining features.

The building with its unique 20th-century British architectural designs is one of the university’s oldest structures, the signature symbol of Uganda’s oldest and biggest university. It was completed in 1941 with funding from the Colonial Development Bourse.

The building holds student records, and the basement is full of archive files spanning the whole history of the institution according to historian Derek Peterson, who says he was intending to organise.

“Efforts to save the left-wing of the building are being defeated by the highly powerful and forceful flames. The left-wing is custody the Human Resource/staff records of the university. Spanning the years this university has lived,” Makerere said in a tweet posted at 3:52 am.