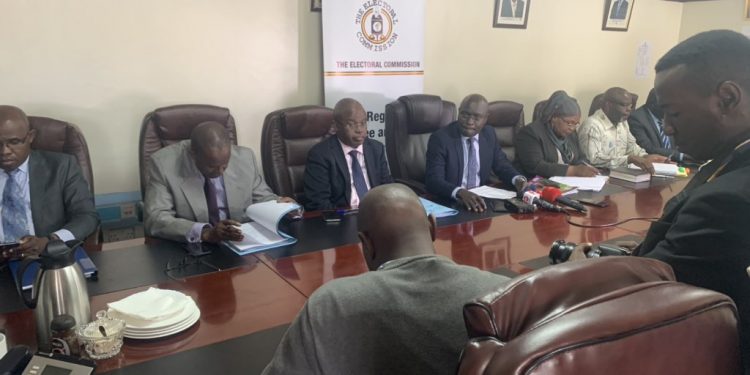 The Electoral Commission has taken note of the arrest of Presidential Candidate Kyagulanyi Robert Ssentamu of the National Unity Platform (NUP) Party, allegedly for violating the Guidelines issued regarding the conduct of Presidential Campaign Meetings.

The Commission has further noted that some members of the public have reacted to the said arrest by engaging in acts of protests, violence and confrontation with law enforcement and other security agencies which has caused unease and tension among the general public.

The Electoral Commission has taken up the matter of the arrest of Candidate Kyagulanyi with the relevant authorities. Accordingly, we appeal to the public to remain calm and restrain from engaging in acts of lawlessness, that may result in destruction of property and loss of life, as already witnessed.

In the meantime, the Commission wishes to caution and warn all candidates for whichever elective position to desist from holding their campaigns in a manner that violates the Guidelines regarding the conduct of campaign meetings.
We reiterate that it is a violation of the Campaign Guidelines for a candidate and his/her agents to mobilize and/or encourage supporters to gather at campaign venues in large numbers in contravention of The Public Health (Control of COVID-19) (Amendment No.3) Rules, 2020, issued on 9th November 2020, which provides that gatherings for purposes of political meetings should not exceed two hundred (200) persons.

The Commission further cautions candidates that it is against the Guidelines to conduct and/or participate in processions and/or hold campaign meetings in non-designated venues as per the harmonised campaign programme.

We wish to urge candidates and their supporters to always observe the SOPs that were put in place to prevent the spread of COVID-19.

The Commission warns all candidates that continued violation of the Guidelines may attract cancellation of the Campaign programme.