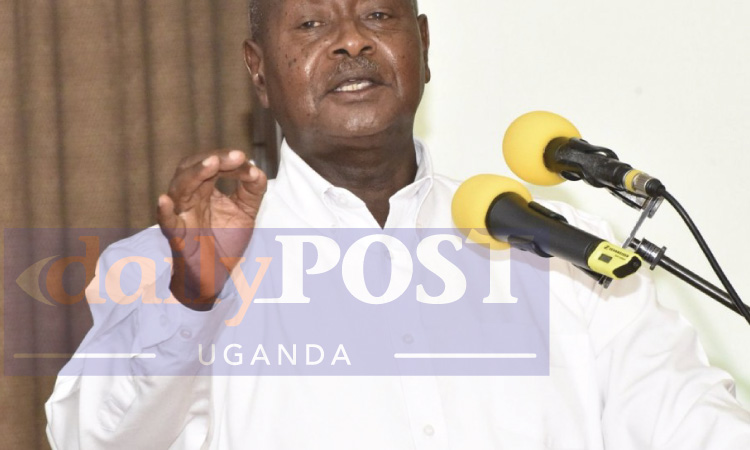 President Museveni has faulted Uganda Police Force and other security agencies for being  infiltrated by criminals which has compromised investigations into high profile murder cases.

While speaking at  AIGP Felix Kaweesi’s vigil at his home in Kulambiro, Kampala, yesterday, Museveni, who first warned Inspector General of Police Gen. Kale Kayihura to clean his house said that “The police has been infiltrated by criminals. Especially the CIID. Instead of arresting criminals they turn against people who bring them information.

There are people amongst them who even leak information; before the one who has reported reaches home, the person he has reported has been informed by the police.

“All these murders, I have followed myself. There are always clues leading to the criminals but the criminals have infiltrated the police,” the president said.

“You get a situation where they are intimidating the witnesses, killing the witnesses,” said Mr Museveni before adding, “that is why the public fears to give information (about criminals) to the police.”

Mr Kaweesi was last Friday morning gunned down by unknown gunmen who were reportedly riding on motorcycles commonly known as boda bodas.

The President who joined mourners at Kaweesi’s home in Kulambiro, a Kampala suburb, told the police leadership to clean up their house in order to defeat the criminal gangs in the country.

Mr Museveni singled out the Directorate of Criminal Investigations (CID), which he accused of bowing to the criminals, saying instead of arresting suspects, the officers arrest those volunteering information.
“The police has been infiltrated by criminals, especially the CID group,” Mr Museveni reiterated.

The President gave an example of a man in Rakai District whom he said had killed up to nine people but the police instead arrested those giving clues to the force.

“Instead of arresting this man, the police arrested the informers,” said the President.

He also gave an example of rally driver Ponsiano Lwakataka whom he said has committed several crimes only to be let off the hook by the police.
Mr Museveni also accused government officials for being selfish and therefore aiding the killing of Ugandans by assailants.

Recently, Gen Kale Kayihura said the cabal is so powerful, has informers at financial institutions and in security circles, which shield them and help them commit crimes.

To criminals
Mr Museveni said his government has defeated many criminal gangs such as the Allied Democratic Forces (ADF) across the country and will deal with those using motorcycles as a new method.

“Now these criminals have shifted to the method of boda bodas, why boda boda? Because boda bodas are many in town and the population in Kampala is big now,” Mr Museveni stated.

He added: “Therefore, they think they can use this method to kill people and they have actually killed up to 10 people.” The President noted that the criminals have been arrested although others are still at large, before he promised an end to the group.
“We shall kill or capture them. If they don’t want to die, they should surrender,” warned the Commander in Chief.

Mr Museveni vowed that his government will not rest until the criminals whom he said are sometimes suspected to be coming from neighbouring Democratic Republic of Congo are arrested.
“That is my message to the criminals. You are going to die because you have killed our people,” Mr Museveni charged.

Mr Museveni, for instance, noted that the killers who use boda bodas are using one gap in the security framework.

“We have been intending to install cameras in all the major cities and the highways, because with cameras, the investigations become very easy, because you see in no time, the person who did it and you can follow them even if they try to run away,” said Mr Museveni.

Mr Museveni said the cameras cannot cost more than Shs400b yet his government has been postponing the expenditure because of the indiscipline demand by public officials whom he said are always striking as they ask for salary increment.