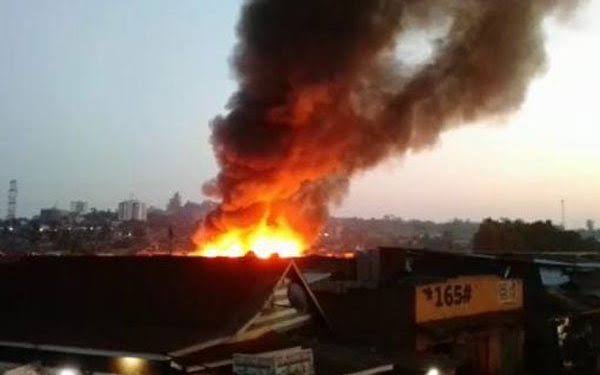 KAMPALA: Kamwokya residents are counting losses after a fire gutted several makeshift houses this evening, destroying property worth millions of shillings. The fire reportedly started at about 7 pm when the majority of the occupants were still vending along Northern Bypass.

Attempts to save household items were unsuccessful as the blazing flames sent neighbours scampering for their lives.

The fire brigade trucks arrived moments later but could not gain access to the blazing structures as the place is congested with so many buildings and a swamp. Residents stood helplessly as fire consumed their property, with others wailing for the lost property.

One of the residents only identified as Mama Mirembe said she was selling fruits by the roadside when the fire broke out. A mother of three, Mama Mirembe kept wailing am wondered where she will seek refuge. She said she could not rescue anything because, by the time the fire started, they were far.

Several other residents remained speechless as the fire raged on.

“The Police Fire Prevention and Rescue Services are currently battling a fire outbreak in Kyamuka Zone, Kamwokya that started today at around 7 pm. The firefighters at the scene with the territorial Police of Kira Road have so far confirmed two deaths of a male adult and a female adult. Their identities are yet to be known. Several injuries from the locals and police officers responders have been registered. The fire is suspected to have started after sparks from nearby electricity lines,” said Kampala Metropolitan deputy police spokesperson, Mr Luke Owosigyire

JUST IN: Ugandans were vaccinated with water instead of Covid vaccine – Statehouse
Scoring over 130 ‘4’s in PLE: Hillside Nursery and Primary School, UNEB officials hoodwink Ugandans as they trade examinations