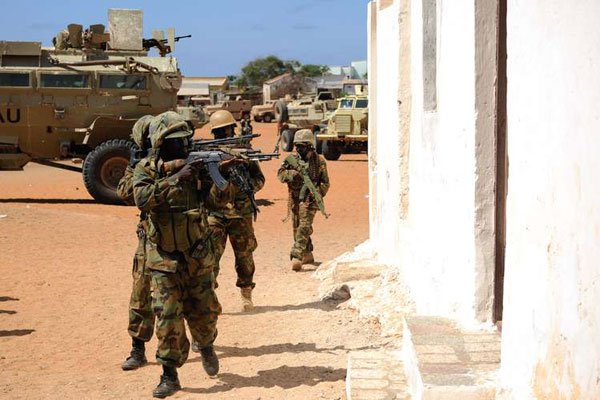 The African Union Mission in Somalia (AMISOM) has completed an induction course into the mission for 22 AMISOM Police Officers from Nigeria, Sierra Leone and Uganda as part of a mandatory training to help them understand Somali culture and operating environment.

Speaking to the newly deployed officers at the closing ceremony of the course in Mogadishu on Monday, AMISOM Police Commissioner, Assistant Inspector General of Police, Augustine Kailie thanked the inductees for their patience and discipline during the course. He urged them to respect the laws of the country and be sensitive to the Somali culture.

“You have to be kind and friendly with the Somali Police and understand their situation,” Commissioner Magnus told the officers.

“It’s not easy for a country to be at war and expect all things to be rosy. So you have to communicate with them, encourage them and tell them that in the future, they will also be on peacekeeping missions in other countries.”

“We are ready to work, that is why we are here to help bring peace together with my colleagues from other countries. We will impart knowledge that is being given to us to our counterparts from the Somali Police Force,” she noted.

On his part, Superintendent of Police (SP) Stephen Yeje of Nigeria noted that the induction course has broadened his knowledge about Somalia and he will be better placed to execute his mentoring and advising duties.

“We see the Somali Police Force as partners. They will lead and we will give them support. We are here to help restore order in regards to peace and security and the SPF will be in the forefront while we give them support,” Stephen said.

The officers from Nigeria, Sierra Leone and Uganda replaced another group of Individual Police Officers (IPOs) who recently returned home after completing a year’s tour of duty in Somalia.

2020 is a crucial year for Somalia and the deployment of these officers will boost the number of IPOs at both federal and regional levels.