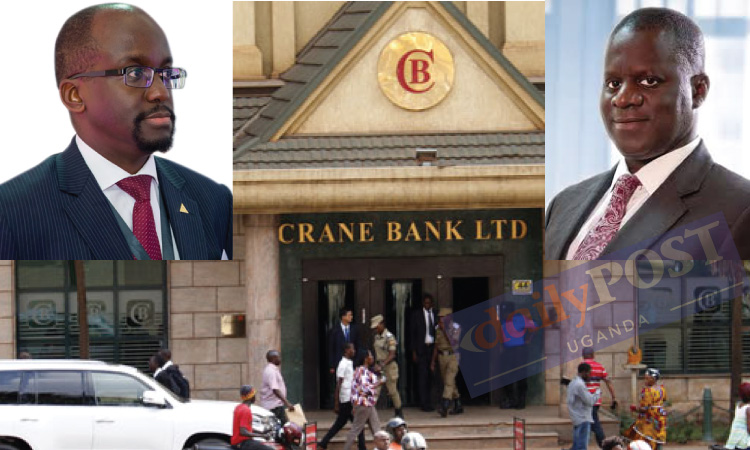 Lawyers from MMAKS and AF Mpanga Advocates representing Bank of Uganda in the case against Sudhir Rupareia, Meera Investments and others have unethically leaked bank accounts of 397 depositors who kept billions of shillings of money with Crane Bank before it was liquidated.

According to leaked documents, the money saved as customers’ deposits with the then Crane Bank was both in Ugandan Shillings and United States dollars amounting to a total of Shs977.187 billion. Most of the huge sums of the money were held by the private as well as government institutions, with a few individuals keeping billions of shillings in the defunct bank.

Some of the prominent government agencies that had cash as of October 20,2016 in Crane Bank included the National Social Security Fund with Shs858 billion on 13 accounts, National Water and Sewerage Corporation (Shs6.417 billion) and Uganda Wildlife Authority (1.482 billion).

Backwards, on October 20, 2016, BOU took over the management of Crane Bank, suspending its board and acting CEO. This seizure, according to BOU Governor Emmanuel Tumusiime- Mutebile, was related to the bank’s under-capitalization. He appointed Edward Katimbo Mugwanya a statutory manager who reported directly to him.

Before the BOU takeover of Crane Bank, the latter was by September 2016, as indicated Ugandan media, actively searching for a strategic partner to buy some of its shares and in October 2016, the potential strategic partner was identified as Bob Diamond  of the Atlas Mara Limited. Negotiations were still ongoing as of 11 October 2016 before BOU took over its management to launch the selling process.

In January 2017, DFCU acquired Crane Bank. DFCU Bank had offered to recapitalise Crane Bank with US$21.6 million after take-over and Aethel Partners Limited offered Shs 1 for the bank’s assets and liabilities and also committed to invest US$215 million in Crane Bank to clean the balance sheet. Whereas DFCU Bank offered to clear all of Crane Bank’s verified debts, Aethel Partners insisted it would clear only part of the failed lender’s debts because of the severe corporate governance and financial risks tied to the bank. These factors boosted DFCU’s bid.

To note is that Dfcu acquired all cash, deposits, loans and advances, furniture and branches, but did not acquire insider loans, related company loans, any shareholder liabilities and taxes among others.

The “Report on the preliminary forensic review at Crane Bank” (December 2016), which was authored by Pricewaterhouse Coopers and commissioned by the Bank of Uganda, recommended the prosecution of Crane Bank’s board of directors, investors, and senior management for allegedly flaunting Uganda’s banking laws and allegedly committing various financial crimes, but Sudhir Ruparelia the former MD of Crane Bank refutes the allegations as the case goes on in court.

In August, DFCU Bank announced an after-tax surge of Shs114 billion profits for the first half of 2017, compared to Shs23 billion over the same period in 2016, Uganda’s largest bank, by profitability. The fast growth of DFCU was attributed to the acquisition of Crane Bank.

According to Mr William Sekabembe, the executive director, Dfcu, the assets brought in terms of loans and advances, contributed to a rise in interest income for the bank. The asset base expanded to Shs3 trillion in part because of the customer loan growth by 55.5 per cent to Shs1.3 trillion. This led to the increment in interest income – the largest contributor to the total income of the bank.
“Dfcu took over Crane Bank so that it can make more profit,” he said.

Furthermore, DFCU, having acquired Crane Bank grew their deposit base from Shs 1.1trillion to Shs1.8 trillion, which they were able to leverage and increase on their lending.

The scenario above has led to some financial experts to question whether the rushed sell of Crane Bank to its rival was the best option that Bank of Uganda.

Below is the leaked list of Crane Bank’s top depositors as exposed by MMAKS and AF Mpanga Advocates as part of evidence they filed in court against Sudhir and others Vide civil Suit No: 493 of 2017. The list includes other details not mentioned in this article.