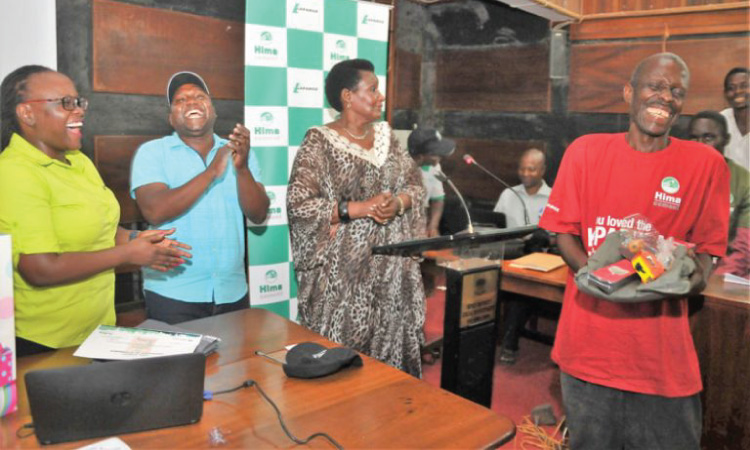 Masons, builders and foremen have been urged to form cooperative unions if they are to achieve/profit from their trade.

This was part of Hon. Amelia Kyambadde, the Minister for Trade, Industry and Cooperatives, advice to builders who took part in Hima Cement Builder’s Academy training program in Mpigi and Mbarara over the weekend.

“Very often, builders are viewed by clients with a lot of suspicion mainly because a number of them want to do side-cuts. I therefore, encourage you to form cooperatives, because it then becomes easier to deal with an organized group. It even becomes easier for you to get contracts because people know your work as well as where to find you,” Kyambadde said.

She lauded Hima Cement for going the extra mile to train its customers on how to get the most out of its products.

“If you go back and put into practice what you have learnt from this training, you will surely be a better professional. I thank Hima Cement for being truly Ugandan. They are the only ones who produce everything they use in their production process locally,” Kyambadde noted.

While delivering his opening remarks, Ronald Kazibwe, the District Commercial Officer, Mpigi Local Government re-echoed the Trade Minister’s advice saying that cooperatives would eventually give the builders a platform to lobby for bigger contracts.

“The major issue with many of our masons today is that they are given verbal contracts, mainly because they do not have addresses. This therefore brings about complications when it comes to payments afterwards. In Mpigi for instance, if you wanted to meet a builder, you may be told to look for one at a local bar. It wouldn’t be the case if you organized yourselves into cooperatives.”

Speaking during the training, Sophie Mirembe, the Trade Marketing Manager at Hima Cement said that the company would continue to sensitize its customers on the best global practices so as to enable them optimally utilize its products.

“As Hima Cement, everything that we do is about empowering our customers. We know that by sharing our industry knowledge with the people who use our products, we shall in the long run benefit from good infrastructure.,” she said.

At the end of the trainings over the weekend, 20 masons were chosen by the different team leaders to visit the Hima Cement factory in Kasese to get an understanding on how cement is manufactured. .

Bashir Ssendagala, the Program Manager at Twezimbe Development Foundation lauded Hima Cement for going the extra mile to train builders on how to get the most out of its cement and building products.

“The challenge we had was that most of the builders had been in the construction industry for over 20 years and yet had no proof of experience. This is why we are happy that Hima Cement has introduced this initiative of giving us very vital tips on building. As you all know, there have been new innovations, especially in the construction industry over the past few years. This therefore means that the masons have to be re-trained in these new innovations,” he said.

The major challenge cited by the masons who attended the trainings both in Mpigi and Mbarara was that site owners often dictate the mixing ratios, thus going against the building codes.

“We are warned by the ‘rich man’ to do what he wants or else he gets a new builder. You find that we are told to mix eight wheelbarrows of sand against one bag of cement. If you advise otherwise, the man can sack you,” Nsamba Emmanuel, one of the participants stated.

In response, Philemon Mubiru, the Technical Sales Manager at Hima Cement advised them to protect their own image and also remind the site owners to abide by the laws governing construction in Uganda.

“Structure failures are due to an extended number of reasons. However, the foremen, engineers and masons get the blame because they are the ones on the site. If the building fails after a few years, the blame will be on you as the builder,” said Mubiru

Mubiru also disclosed that starting January 1, 2017, Hima Cement is introducing a ‘concrete and cement ambulance’ that will be at the disposal of customers at no cost. This ‘ambulance’ will have instant testing kits for concrete and cement, it will also address any urgent customer needs.

Through a series of workshops dubbed the Hima Cement Builders Academy, masons are trained on issues such as concrete mixing ratios, site management, contracts costing and site safety. This year, over 2,000 masons from 10 districts have been trained.

Over the years, Hima Cement has developed a broad curriculum to provide and impart knowledge on various facets of construction such as laying foundation, roofing, interpretation of plans and drawings, walling, plastering and tips on using building materials economically.

The initiative is in recognition of the challenges that the industry has faced over time with regard to construction management and professionalism given that most masons and foremen have built their skills mostly through informal learning (apprenticeship).