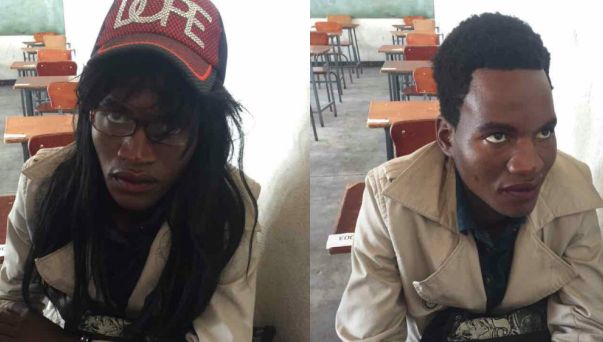 A 26-year-old Zimbabwean man was arrested after he was caught pretending to be his girlfriend so that he could write her final exam on her behalf.

Mkonzi Mbango disguised himself as a woman and pretended to be his girlfriend so that he could write her exam for her.

According to Mbango, he wanted to help his girlfriend because she was failing.

After people noticed that Mbango was not a female, they alerted the necessary parties and dragged Mbango out of the classroom.

He was then arrested.

Mbango’s girlfriend said that the pair had agreed to help each other so that she could pass. The teen says she now regrets her decision following her boyfriend’s arrest.

The girlfriend known by her Twitter name as @MbaliZuma1 was also arrested and was detained for three hours.

Speaking on his offense, the Zimbabwean man who was caught writing final exams for his wife during the final grade 12 exams said he did it because his woman had been failing the examinations for four years.

The wife however further revealed that she regrets her move during her arrest and detention for three hours.

I killed my boyfriend because he infected me with AIDS, woman tells police
Panic and anxiety as Nakalema prepares to address media on arrest of top officials of Bank of Uganda