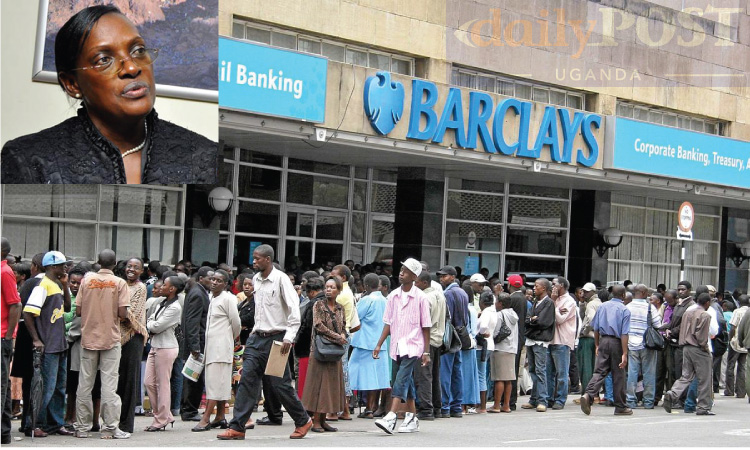 Barclays Bank has issued unreserved apologies to Ms Justine Bagyenda, the outgoing executive director of supervision at the Bank of Uganda.
The apology follows leaked bank account details of Bagyenda, laying bare how she allegedly over the years made several fixed deposits at the bank, making billions of profits in the process.

In a press release, Barclays says in line with Financial Institution’s Act, their fiduciary responsibilities and internal company polices is protecting their customer’s personal data is the utmost priority for them as a bank and therefore, internal disciplinary actions are being undertaken to address the leaks.

“The bank regrets the unlawful act leading to disclosure of our said customer’s information in the media and sincerely apologies to Ms Justine Bagyenda for the inconvenience this regrettable incident may have caused” reads the press released.

It further adds “Following recent media reports which started on March 1, 2018, surrounding the handling of information relating to the account of Ms Justine Bagyenda, a customer of the bank, we would like to assure our customers and the general public that we take the matter of customer confidentiality very seriously” reads the statement.

The bank further said that whereas, there are alleged cases of customer information breach, Barclays has in place internal mechanism to ensure that they are thoroughly investigated and conclusively dealt with.

“Accordingly, disciplinary action is being taken against employees responsible for unauthorized access to her accounts in line with the law and our polices”

Barclays is the second bank to apologise to Ms Bagyenda after Diamond Trust Bank (DTB) came out first and issued the apology regarding similar issue.

The leadked bank documents show that Ms Bagyenda in the last six years, her account balance was Shs20 billion.
Last three weeks, Eagle Online published a series of stories detailing the depths of Ms Bagyenda’s bank accounts she has with the bank, including one about how she has a whopping Shs20b sitting on two different accounts.

The stories have prompted DTB and Barclays to investigate the source of information in the bank, and the investigation, reportedly led them to one of their staff who, the Bank leadership claims, was ‘compromised’ and actively participated in leaking account details of their client.

Bagyenda, whose contract at BoU was supposed to end June 2018, went on annual leave on January 22, but in a reshuffle announced by BoU governor Emmanuel Tumusiime Mutebile, she was retired. In her place Prof. Mutebile appointed Dr Tumubweine Twinemanzi the new Director in charge of Supervision.