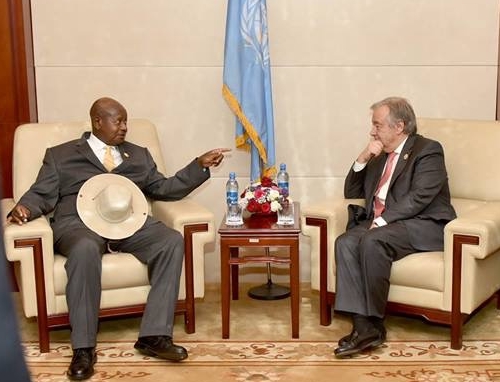 United Nations has confirmed that United Nations Regional Service Centre (RSCE) would not be relocated from Entebbe to Nairobi much as some administrative transactional functions of the RSCE would be affected, with some Ugandan staff losing jobs but will be compensated.

Through Uganda’s Ambassador to United Nations Adonia Ayebare, Guterres wrote back to Museveni, assuring him part of the RSCE will remain in Entebbe.

About Ugandan UN staff who may be affected by the relocation proposal, Guterres stressed in a detailed letter that “Subject to the decisions of the General Assembly, should the proposals go forward, it is important to emphasize that the RSCE will remain in Entebbe. I wish to assure you that every effort will be made to ensure that Uganda staff affected by this proposal will be covered by the mitigating measures under consideration; including facilitation of their continued employment in future shared services.”

Below is Guterres’ response to Museveni in full.

I appreciate your concerns regarding the potential impact that the Global Service Delivery Model (GSDM) may have on the United Nations presence in Entebbe.

As you may be aware, the consideration by the United Nations General Assembly predates my assumption of office, and the shift to a new model for the delivery of administrative services was first proposed to the General Assembly nearly six years ago.

A number of factors were considered in the independent external assessment to determine the locations proposed in the report, submitted pursuant to General Assembly resolution 71/272A of 23 December 2016.

The location selection does not ply any adverse reflection on security and stability in Uganda nor on the benefits that we have been enjoying since the establishment of the Regional Service Centre in Entebbe (RSCE).

The suggested proposals in no way reflect a lack of appreciation for the support Uganda provides to United Nations operations, including as a most generous host of the Entebbe Support Base (ESB) and the RSCE.