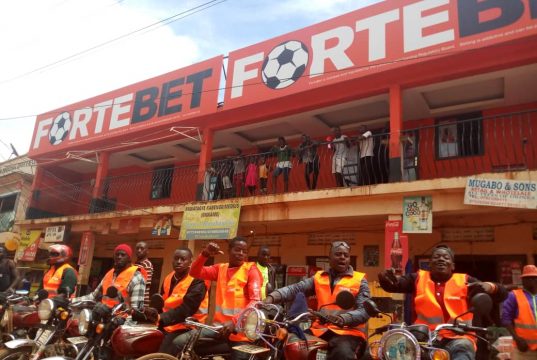 KAMPALA: The revenue that the government gains from sports betting companies, especially foreign ones, has grown over the years, Daily Post can authoritatively reveal as government lays plans to stop licencing more others based outside the country.

The sector contributed over Sh45 billion in 2017/18. It is projected that Shs50 billion will be collected by end of financial year 2018/19, according to the industry regulator, the National Gaming Board (NGB).

This puts betting among the biggest revenue generators to the national coffers from the gaming sector with casinos.

Apart from the revenues which go to the national income, Daily Post has established that the industry has turned a full time job among youths, with number put at 8, 959.These work as branch managers, accountants, cashiers, marketing agents, security guards, cleaners as well as waitresses and chefs for casinos. Currently 99 percent of the employees in the industry are Ugandans.

Jonathan Jeffery Kyeyune, NGB’s Head of Public and Corporate Affairs, the gaming industry has had a positive contribution through rental income to property owner, with over 660 renting spaces upcountry and over 800 in parts of Kampala, Mukono and Entebbe. According to Mr. Kyeyune, gaming operators invest heavily for long term with most entering in to the tenancy agreements of not less than 12 months, which ensures stable income streams for their respective landlords.

Said Okot, 33, from Kampala says he bets every day from Sh1, 000 to Sh5000 and earns good money for taking the risk and he says he is lucky he has won over three million shillings since he started betting five months ago.

“I am working twelve hours a day as a casual labourer at one of the factory in the city and I am getting a wage of not more than Shs150, 000 per month yet I have to transport myself to and from work,” says Okot, adding that sports betting has supported him care for his family in terms of paying rent, school fees, health care and feeding. He however warns others to keep working and not to bet all day.

Betting in Uganda is not for male punters alone. Ladies too join the practice fast with the majority being influenced by their peers despite having possibility of losing.
Janet K. Nasuna (35), says her love for football and her friends’ betting behaviour influenced her into betting business which she now does routinely though she says she does it with precaution not to get addicted. “It has indeed been helping me, I won five million shillings and used some of it to pay my rent for a year. I no longer make calls to my relatives and friends to ask for money over small things. I run a small business of hawking children’s clothes. I started it after winning the money,” she says.

Sports betting industry has grown in the country in the past three years due to people’s affinity to sports thanks to the technological innovation which presents sports fans with the news of their favourite sports clubs at their convenience.

“It is true that there are punters who know nothing about sports and not fans of neither football clubs, but these are very few ones and represent that category of unserious bettors. Most of the serious bettors who can spend up to Sh1000, 000 are strong fans of football,” says an analyst.

Ahmed Mukisa, a business expert in Kampala, says the growth recorded in sports betting in Uganda also relates to changes taking place in the society including the growing number of middle class which among others has the characteristic of spending money as they entertain themselves.

The ever growing of sports betting has outshined casino in generating government revenue. “Sports bettors are many compared to those of casino and they are not affected by the current economic condition as their casino counterparts do,” an expert says.

However, the betting frequency among youths in the country especially in the halls is coming down low due to the fact that established a sports betting centers in the country observe regulations which makes it hard for the youth to enter the premises.

But betting practice is urban oriented and is dominated in Kampala and Wakiso which is the richest region in the country.

On why others regions doesn’t have betting shops, terminals or agents, an analyst said the investors always put their capital in areas they can make profit.

A General Manager of one of the popular betting companies in Kampala, says although the industry had been growing fast in recent years but the frequency of betting among people has currently reduced due to what he calls ‘economic shake up’. But other operators fear that the government decision to allow ban registration of foreign betting companies is not good since Uganda is a member of the international community and subscribers to World Trade Orgainsation.

The government says it recognize the role played by sports betting industry in bringing development through its revenues in the government.

“We would like to promote and develop any sector which by any way generate income and uses that income to pay tax to increase its ability in contributing our efforts to bring about development in the country,” said as top official in the Ministry of Finance and Planning.