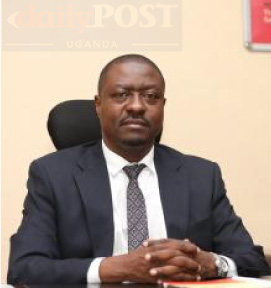 KAMPALA – Eng Andrew Kitaka Mubiru, the Director of Engineering and Technical Services at Kampala Capital Authority has been tentatively appointed Executive Director of Kampala. His appointment follows the resignation of Jennifer Musisi Semakula, after a seven-year reign at the helm of the city.

According to a statement issued by the Minister in Charge of Kampala Beti Olive Kamya, Eng Kitaka will serve in the position until President Yoweri Museveni appoints a substantive Executive Director for the city.

Mr Museveni is yet to approve Musisi’s resignation neither has he appointed a new executive director.

Ms Musisi announced her exit on October 15 and submitted her resignation letter to the President, indicating she would vacate office on December 15.

She handed over the seal of authority, 13 KCCA accounts worth Shs113.9 billion, 250 KCCA land titles, a list of staff members, ministerial reports, pending and on-going projects, financial year reports, reports of city festivals, among others items.

Eng Kitaka previously acted as deputy executive director when Dr Judith Tukahirwa resigned from the post in 2016. He will be deputized by Samuel Sserunkuma.

An experienced hand at KCCA, he directly superintended modernisation of the city’s physical infrastructure, including upgrade of 210 kilometres of roads to bitumen and automating traffic control at 20 junctions, which headline Ms Musisi’s feats as executive director. He is considered by insiders as the brain behind Kampala’s new look.

Last week Daily Post Uganda reported that three people are under scrutiny by the appointing authority  in bid to find the next Kampala Capital City Authority (KCCA) executive Director.
Highly-placed sources say those on the list are engineer Andrew Kitaka, the current KCCA director for Engineering and Technical Services; Mr Henry Mayega, Uganda’s deputy ambassador to China; and, Mr Patrick Mukiibi, the commissioner for Tax Investigation at Uganda Revenue Authority (URA).
Multiple individuals knowledgeable about the process, but who spoke to this news website on condition of anonymity because the matter is confidential, said Kampala minister Beti Kamya is presently appraising the candidates.