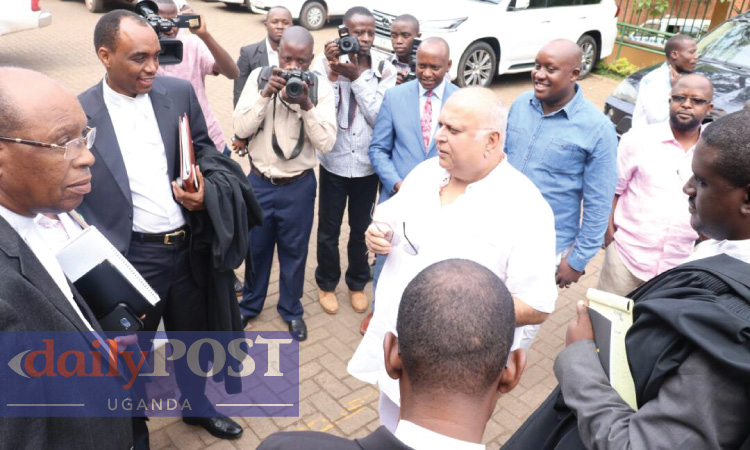 The lawyers representing Bank of Uganda in a Shs400 billion case against billionaire businessman Sudhir Ruparelia have been told by court that they erred at law and were acting to jeopardize the city tycoon’s business interests in respect to the now-defunct Crane Bank that is under receivership.

Commercial court Registrar Lillian Bucyana, who read the judgment on behalf of Justice David Wangututsi, told lawyers Timothy Masembe Kanyerezi of MMAKS Advocates and David Mpanga of AF Mpanga Advocates that they acted in conflict of interest when they represented the BoU against Mr. Ruparelia, their former client.

Sudhir congratulates his lawyer Peter Kabatsi after the ruling

Mr. Ruparelia, who was represented in the landmark case by Messrs. Kampala Associated (KAA) Advocates, sought court’s intervention against the two lawyers, arguing that they had previously represented him and a host of his companies for 12 years, and that they should instead have acted as his witnesses in Uganda’s biggest commercial case that pitted the BoU against him.

The Judge took note. And in his ruling, Justice Wangututsi said that Masembe Kanyerezi and Mpanga breached the client-counsel relations that emphasize secrecy.

However, in their defense Mpanga and Masembe denied working as Sudhir’s legal representatives, saying the businessman’s application was aimed at depriving BOU of “capable,” “ethical” and “incorruptible” counsel of its choice.

They further claimed Sudhir’s conclusions were based “a clear misapprehension of the applicable laws” which they said was a “result of negligent legal advice.”

Mpanga’s firm argued the facts they knew about this case were as a result of being advocates for Crane bank upon the instructions of BOU, who is the bank’s receiver.

But Sudhir argued that considerations contained in the report by PWC instituted to investigate his alleged mismanagement of Crane Bank, was heavily based on Mpanga’s legal analysis and advice given by Bowmans Uganda which is the other name of AF Mpanga Advocates.

Mr Sudhir further submitted the alleged fraud case brought against him by BoU had a number of falsehoods such as him having been involved in the day-to-day running of his former Crane Bank which he wanted Masembe to defend him.

“As my personal lawyers, they are witnesses to the fact that I only sit on the board of directors and did not run the said bank on a day-to-day basis nor was I the dominant executive force,” said Sudhir.

Sudhir addressing journalists after the ruling

Meanwhile as the ruling was being read today, the two affected lawyers were not present in court.

Sudhir was personally in court and shortly after the ruling, he said he would lodge a complaint with the law society of England where one of the conflicted lawyers is a member so that he is exposed.

Bank of Uganda sued property mogul Sudhir Ruparelia for allegedly stealing Shs397 billion from his defunct Crane Bank and the former was supposed to be represented by Timothy Masembe and David Mpanga of MMAkS Advocates and AF Mpanga Advocates respectively.

Below is the details of the ruling.

Ruling – Sudhir vs MMAKS Advocates & Others