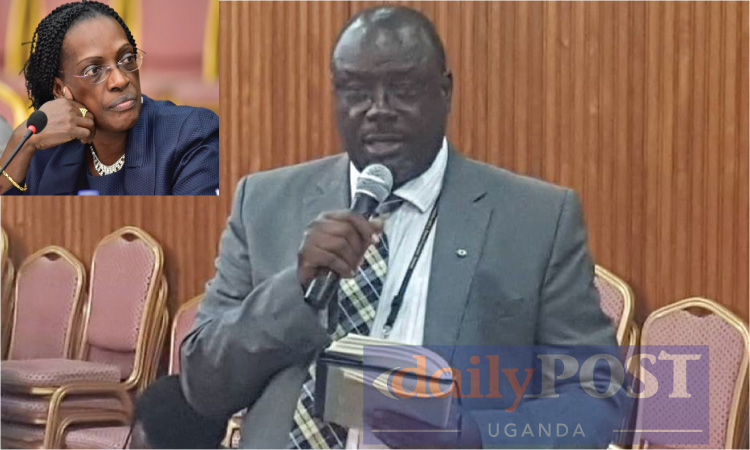 KAMPALA – During Parliamentary Committee probe, Bank of Uganda’s Security Director, Milton Opio Orech, told COSASE that the staff attached to former Executive Director, Supervision, Justine Bagyenda were caught on CCTV stealing classified information, many people were left wondering how this could have happened in one of the most protected buildings in Uganda.

In a confidential letter addressed to the Governor, Tumusiime Mutebile on May 10, 2018, the Opio explains that how Bagyenda’s bodyguard and driver on February 11 breached the bank’s security protocol to enter their boss’s office and make out with three bags of confidential information which they passed drove out of the bank unchecked.

Opio adds that at the time the documents were stolen, Bagyenda was actually in her office contrary to reports that she had travelled abroad.

“We have the recording on a Flash Disc copied from the integrated security system of the bank and the relevant footages were shared with you on March 14 in your office,” Opio added.

After reviewing the CCTV footage, Mutebile okayed a decision to search Bagyenda’s home for the stolen documents but the Police’s Criminal Intelligence Department (CID) took its time. By the time the warrant was issued, information had already leaked to Bagyenda and two of the three stolen bags were back to BoU coffers (still without security check) and as a result, the search, of her house was called off.

“We requested for a search warrant to be issued and the residence searched on March 14, 2018, but the warrant was issued on March 15 – a day after Bagyenda had returned from a trip to South Africa,” the letter reads.

Opio suspects that information about the search had been leaked to Bagyenda who cut her trip short. CCTV footage on March 14 at 06:30 pm shows Bagyenda’s bodyguard and driver carrying two of the stolen files back to Bank of Uganda and the former EDS was also in the office at the time.

“The contents of the bags were neither screened nor checked but they were emptied in her offices and the bags returned to her car by the personal escort and driver while she was still in office,” Opio adds.

After consultation with BoU’s security consultant and the Governor, the search of Bagyenda’s home was called off following suspicion that a mole in the bank or the CID has leaked the search plans to Bagyenda and documents possibly moved to a new location.

Indeed, in an email, Bagyenda confirmed to the Opio and the BoU’s Executive Director Administration that she knew about the failed search noting that the documents taken from the bank were personal information that she decided to move due to a “witch hunt.”

Bagyenda who said she had been taking “her” documents out of the bank since February 11, 2018, promised to inform the relevant parties in the future before moving any other documents but according to Opio’s letter, she never did.

She also claimed that at the time the three bags of documents were sneaked out of the bank, the security scanner at the entrance of the bank was nonfunctional and it is why the bags were not screened at entry and exit – an allegation the security personnel at the bank were rubbished.

Bagyenda has been given a grace period until Monday, December 3, to appear before COSASE or face arrest. On Thursday, her Juliet Adikot and personal aide, Job Turyahabwe were arrested at Parliament for lying to the Committee under oath.