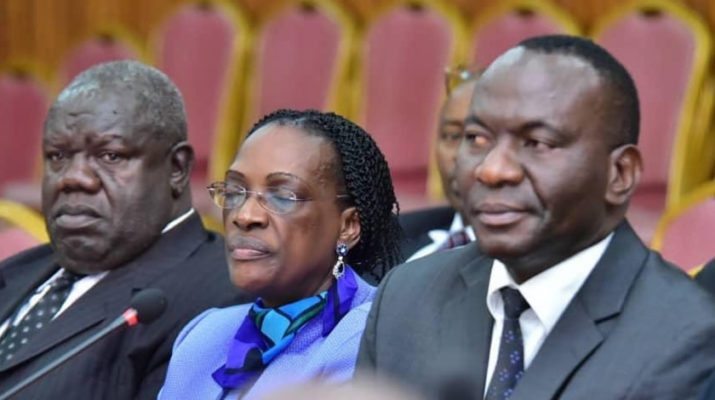 KAMPALA:  A confidential security letter to the Governor Bank of Uganda provides crucial details on how the central bank staff beat security to sneak out classified documents from one of the most protected buildings in the country.
Tidbits of this case first emerged in the House committee on Commissions Statutory Authorities and State Enterprises (Cosase) in November last year, but the new details in a confidential letter to Governor Emmanuel Tumusiime-Mutebile provides context on what the MPs have called “security lapses” at the central bank.
“It is very clear, the letter to Mutebile was just for cover-up and the scandal of security lapses at BoU says a lot about the impunity of civil servants and this is one of the forms of corruption,” Shadow Attorney General Wilfred Niwagaba said.
“How come security at BoU fail to stop Justine Bagyenda from taking away classified government documents? They do not even know which documents she took and I hear she refused to be checked although they blame intimidation and faulty scanners,” he added.
Mr Milton Opio-Orech, the head of security at BoU, said in his May 10 2018, letter to the Governor that his department intervened after receiving confidential information that the then executive director of banks supervision, Ms Justine Bagyenda, had over a period of time sneaked out bags of undisclosed documents.
“The department carried out investigations and reviewed the closed circuit television footages and confirmed that documents were actually ferried from the premises [BoU]….. They were carried out of the office and loaded into her [Ms Bagyenda] car by the bodyguard and driver on Sunday February 11, 2018 at 4.20pm without being checked at the security checkpoint. She was in the office during the time they were taking out the documents,” the letter reads in part.
Some BoU officials later went to Mr Abdu Katuntu, the Cosase chairperson, and told him that it was the Governor who first detected the security breach in February 2018 through his networks.
Mr Mutebile would later instruct security boss to “lay traps,” before announcing staff changes.
In one of the meetings sources described as ‘hot’, the Governor, in no uncertain terms demanded to know why the security scanners did not record the missing documents.
The MPs investigating closed banks have demanded for evidence of this narrative.
Mr Mutebile’s explanation of the abuse of procedures and the scandals in the sale of the seven closed commercial banks seem to offer credence to the latest narrative.
The Governor, without throwing any names of the culprits, has since admitted that mistakes were made in the closure of some banks and promised to fix the problems at the central bank.
“The staff changes [at the central bank] which were made in February 2018 were made to address some of the challenges that we knew but which have now become all evident in the last few weeks,” Mr Mutebile said before he promised to strengthen the bank’s regulatory functions.
After the Governor received this confidential intelligence from one his confidants, he instructed Mr Opio and his team to carry out “thorough investigations” and get the details of the documents Ms Bagyenda’s driver, with the help of the body guard, had sneaked out of central bank.
The security, however, failed to get the specifics of the documents since the scanner failed to work.
Although the security team explained that the scanner at the BoU entrance failed to work, the person who leaked the information to the Governor and later took the details to Mr Katuntu, accused Ms Bagyenda of alleged complicity and using her seniority to intimidate security guards on duty.
After receiving confidential information from BoU sources, the MPs investigating irregularities at BoU, wondered why it took Mr Opio almost 60 days before meeting Mr Mutebile to brief him on the missing documents.
The documents in question started vanishing in February 2018 even as other BoU sources talked of January 2018.

However, this website understands that the BoU security team received intelligence information on the missing documents in March 2018 but wrote to the Governor on May 10, 2018.
The committee is investigating why Mr Opio and his team did not detect “theft of vital bank documents.”
In his letter to Mr Mutebile titled, ‘Removal of documents from the Office of Ms Justice Bagyenda located at Plot 45 Kampala Road without following the bank procedures’, Mr Opio indicated that the relevant footages were shared with the Governor on March 14, 2018 in his office.
After the meeting, Mr Mutebile directed that a search be made at Ms Bagyenda’s home.
However, the planned search later leaked to Ms Bagyenda and they abandoned it. This particular narrative was given to Cosase members in November 2018.
Ms Bagyenda is expected to respond to the accusations of using her aides to sneak out BoU documents this month when the Committee resumes business.
She is also expected to give details of the missing documents and the bags which were later returned to BoU.
Her driver, Mr Job Turyahabwe, and bodyguard Juliet Adikot were arrested in November 2018 over allegedly sneaking out BoU documents and lying under oath before Cosase.
Evidence before the Katuntu-led committee shows that the unidentified bags of confidential documents were not scanned because some of the suspects intimidated security guards on duty.
Consequently, the probe committee is struggling to establish the details of the documents in question, pending Ms Bagyenda cross-examination on this issue.
Mr Katuntu was not available to explain when Ms Bagyenda will be asked to answer the pending query.
But the evidence before Cosase shows that on February 11, 2018, CCTV cameras caught the driver and bodyguard of Ms Bagyenda stealing vital documents.
Some MPs have since demanded that the driver and bodyguard be recalled to the committee on the day Ms Bagyenda will be asked to defend herself from the accusations of stealing BoU documents.