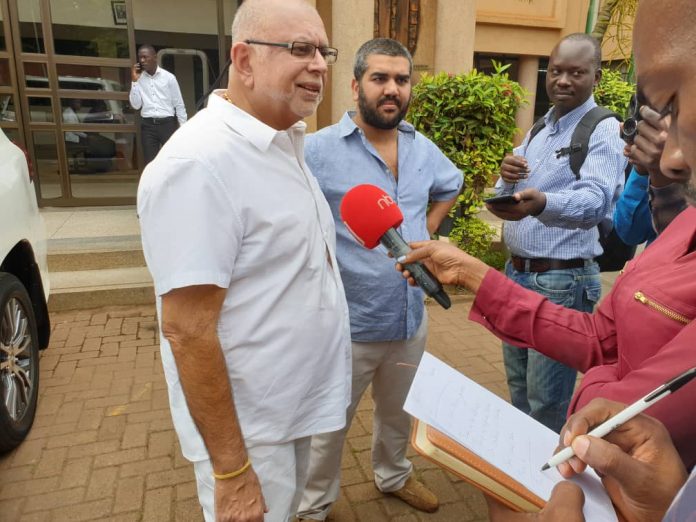 KAMPALA:  The ruling of the case in which city tycoon Sudhir Ruparelia wants the new lawyers hired by Bank of Uganda declared conflicted, and therefore unfit to represent the central bank in the commercial dispute with the businessman has been differed to April 29.

This new development was communicated to all parties who were eagerly waiting in court by Justice Gadenya Wolimbwa who notified to them that the ruling was ready.

In his suit, Crane Management services contend that when DFCU took over management of Crane Bank, it illegally took possession of the rental facilities from which the real estate company seeks to recover its arrears.

However, in defence, DFCU contracted the Law firm of Sebalu, Lule and Advocates but Sudhir says he contracted the same law firm in 2006 to draw and review tenancy agreements in respect of the said rental premises thus there is conflict between the lawyer and his client.

“In view of the advocate-client relationship between the applicant (Crane Management Services Ltd) and the 1st respondent (Sebalu & Lule advocates), the latter’s continued participation as defence counsel for the 2nd respondent (Dfcu bank) herein, which is the defendant in High Court Civil Suit (HCCS) No. 109/2018 against the applicant/plaintiff, is prejudicial to the applicant’s head suit,” the petition reads in part.

He avers further that during their client-advocate Interaction with the firm, he revealed privileged and confidential information which DFCU can exploit to his disadvantage in the present dispute before court.

In responses to his worriers, the firm of Sebalu Lule which is represented by Peter Walubiri asked the judge to dismiss the application for lack of merit saying the tenancy agreements drawn in 2006 are not confidential in any way to dent Sudhir’s case.

Mr Rupareria also wants the court to issue a permanent injunction, restraining Sebalu & Lule Advocates from appearing as defence counsel for dfcu bank in the other court case that the two principals are battling out.

In December 2017, the Commercial disqualified Mr Masemmbe and Mr Mpanga from the sh397b Sudhir Ruparelia’s case against Bank of Uganda (BoU), citing conflict of interest.

In his ruling delivered on December 21, 2017, the head of the commercial court division, Justice Wangutusi stated that David Mpanga of A.F. Mpanga Advocates and Timothy Masembe of MMAKS Advocates acted in violation of the Advocates (Professional Conduct) regulations.

Section 4 of the regulation provides that an advocate shall not accept instructions from any person in respect of a contentious or non-contentious matter if the matter involves a former client and the advocate as a result of acting for the former client is aware of any facts which may be prejudicial to the client in that matter.

Court documents further indicate that when dfcu bank took over the assets and liabilities of Crane Bank, it also took over occupation and use of the said rented properties from which the real estate company wants to recover accumulated rent arrears from dfcu bank.