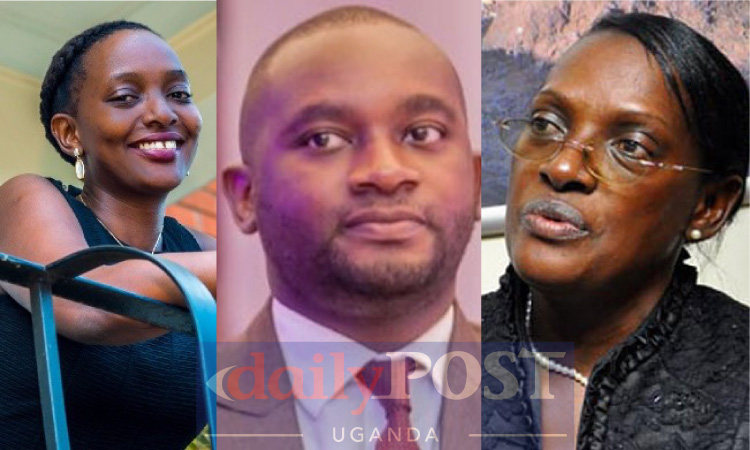 Ms Justine Bagyenda the troubled former Bank of Uganda director for supervision could have wired billions of shillings to her children’s accounts during her tenure at the country’s central bank.

Ms Justine Bagyenda, former Executive Director in charge of supervision, is reportedly to have wired up to Shs499, 428,906 million to a mobile money account belonging to his son. Leaked details unearthed from the ongoing investigations link a number of BoU’s top officials to a number of wealth around the city and other upcountry towns

Information reaching Daily Post Uganda indicate that Bagyeda’s two children, Robert Muhumuza and Caroline Agaba have acquired multibillion properties around the city yet they earn no more than Shs5 million each, which raises questions as to how they managed to acquire such prime properties with their salaries.

The two children own prime properties in Kampala and Western Uganda, raising questions as to how they could have afforded those properties without the help of their mother.  Already Bagyenda’s immense wealth is under investigation, pointing to the fact that she could have used her children to partly hide her wealth.

Robert Muhumuza Bagyenda, a manager in charge of Agent Acquisition & Supervision at Stanbic Bank, and Caroline Agaba, a Network Performance Engineer at Umeme, according to their LinkedIn online profiles.

According to credible sources at Stanbic where Muhumuza works, he earns a salary of Shs4,452,000 raising questions as to how he is able to service a dfcu mortgage for Block 200, Plot 1548- Munyonyo Makindye Division– measuring about 0.0700 hectares said to be worth more than Shs600 million.

The mortgage was registered at the registrar of titles, on February 2, 2016.

This new revelation about Muhumuza’s salary could offer an explanation as to why her mother sent her up to Shs499,428,906 on mobile money– to pay for the properties, acquired in his names on behalf of the mother.

Investigators from the IGG and Financial Intelligence Authority, who placed Bagyenda under investigation, may want to inquire into why Muhumuza, opted to take up a mortgage facility at a competitor bank, at an average 20% from dfcu, yet Stanbic bank, his employer, offers all its staff mortgages at 7%.

Caroline Agaba, also a daughter of Bagyenda, on the other hand, earns below Shs4 million per month at Umeme. On the same date (February 2, 2016), Agaba had a prime property in Nakawa Division, Block 205, Plot 1352 measuring 0.0649 hectares registered in her names.

Undeveloped plots of that size in Nakawa are valued at over Shs500 million.

Little is known about a one Murembe, also believed to be a Bagyenda kid, who also registered another piece of property on the same day- Block 252 Plot 105A in Nakawa Division measuring 0.0800 hectares; also said to be worth more than Shs500 million.

The three children together with Justine Bagyenda, already co-own two prime properties: Plots 10 and 21, measuring 0.0840 and 0.0820 Hectares respectively along Museveni Road in Ntungamo Municipality. They also own another property at Plot No.10, Kaguta Road in Mbarara Municipality.

These new clues emerging about Bagyenda’s desperate efforts to hide her wealth could provide clues to investigators from the Inspectorate of Government and the Financial Intelligence Authority.

Should the charges against Bagyenda be found to be true, then her children too could be charged under the Anti-Money Laundering Act, 2013 (AMLA).

Under the act, persons who knowingly aids money laundering faces imprisonment of up to five years or a fine not exceeding thirty three thousand currency points (Shs660,000,000).

Both Robert Muhumuza and Caroline Agaba are graduates from the prestigious Heriot-Watt University, in Edinburgh, Scotland.

Muhumuza graduated with an Electrical & Electronics Engineering degree, majoring in Computer Systems Networking and Telecommunications and worked at Airtel as a Network Planning & Optimization, Junior Engineer in 2009 and left in less than a year to join Stanbic.

At Stanbic, he rose through the ranks to become a manager at Stanbic Bank’s Corporate & Investment Banking division.

Caroline who graduated from University of Cape Town with a BSc Electrical Engineering and later, did an MBA, business Administration at Heriot-Watt University, worked at Orange Telecom and Ecobank in junior positions, before joining Umeme  as a network Performance Engineer.