Am always a happy man but the devil is a liar, Ntagali cries out - Daily Post Uganda 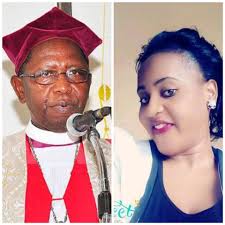 KIKUUBE: Embattled Retired Archbishop of Church of Uganda Stanley Ntagali, who was suspended last week from performing church duties over adultery, has spoken in public for the first time since his alleged misdeeds came to light.

“I am always a happy man but the devil is a liar. We are more than conquerors in Jesus’ name,” he told his guests at his home in Wambabya Village, Kiziranfumbi Sub-county in Kikuube District.

Archbishop Ntagali, who had not directly commented on the matter in public, made a speech on Saturday at a ceremony to give away his daughter, Ms Barbra Victorious Tumwijukye, to her fiance, Mr Samuel Apedel, the public relations manager at the National Water and Sewerage Corporation.

The function was attended by more than 200 guests, including religious leaders, politicians and civil servants.
Much as Ntagali did not admit or refute the allegations of adultery against him, he described the devil as a liar.

He said his daughter’s ceremony has washed away the misery he is currently going through.
In a January 13 letter to the Anglican Bishops under the Global Anglican Future conference, Archbishop Stephen Kaziimba Mugalu suspended Ntagali from performing any priestly duties following his alleged acceptance of committing adultery.

The suspension of Ntagali has gone viral on social media and mainstream media, triggering a raging debate that is querying his moral standing as a face of the Anglican faith. The matter has reportedly turned divisive with some Christians and the clergy comforting retired archbishop while others have been castigating him.

He has repeatedly not answered telephone calls from media and neither has he released any official statement on the matter.

To empathise his message, Ntagali quoted a biblical verse from Romans 8:31.
“What, then, shall we say in response to these things? If God is for us, who can be against us?” he said.

He commended Mr Fredrick Makuru, a radio presenter at Liberty Broadcasting Services (LBS), for fair commentary on his viral adultery saga.
Mr Makuru was present at the function.

“For what has been happening, I followed you very well and you did not exaggerate the matter. May God bless you,” he said.

It is alleged that the archbishop emeritus sired a child with a married woman last year.
Ntagali served as eighth archbishop of the Church of Uganda and retired early handing over to Dr Kaziimba on March 1, 2020.